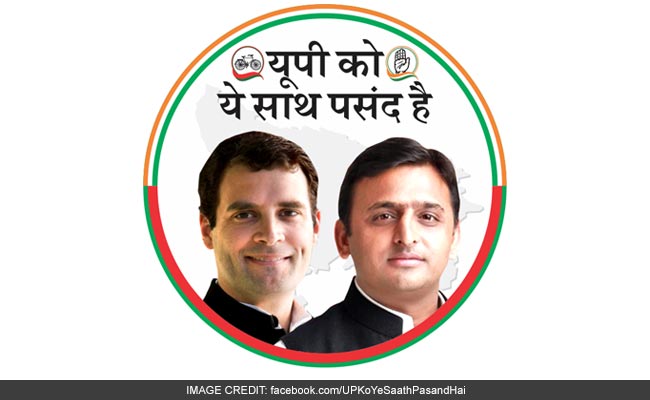 Lucknow: The Congress-Samajwadi Party alliance in Uttar Pradesh will gather steam today as Akhilesh Yadav and Rahul Gandhi get together for a mega "Rath Yatra" in Lucknow. The two leaders will jointly address the media before the three-hour road show begins at 2 pm. It will be their first appearance after the two parties sealed a deal last week. The yatra will begin from the city's GPO Park near the Mahatma Gandhi statue and end at Ghantaghar, covering a total of 6 kilometres. It will pass through the most thickly populated areas of the city, among those are Aminabad and Hazratganj with significant Muslim population

Mr Yadav, 43, and Mr Gandhi, the 46-year-old Congress vice president, will also hold joint election rallies around the state which votes in seven phases from February 11. The results will be declared on March 11.

The young Chief Minister, who wrested control of the Samajwadi Party from father Mulayam Singh after a bitter family feud, was quick to partner with the Congress. The alliance was also seen as a major issue of contention within the state's ruling family.

"UP koh yeh saath pasand hai (UP likes this tie-up)" has been finalised as the tagline for their publicity material, said sources in the Congress.

Promoted
Listen to the latest songs, only on JioSaavn.com
Another catchphrase making the rounds was "Apney ladkey, Modi Bahaari" (our home boys vs Modi the outsider), but sources said Akhilesh Yadav was not sold on the slogan because of its emphasis on a direct contest with Prime Minister Narendra Modi.