Dramatic visuals show a large number of people on a field as three rounds are fired. People are seen panicking and running frantically in the 5-second video.

People are seen panicking and running frantically in the 5-second video.

A man was shot dead in front of local officials on Thursday in Uttar Pradesh's Ballia over a dispute, the police said, after which Chief Minister Yogi Adityanath ordered suspension of officials present.

46-year-old Jaiprakash was allegedly shot dead by Dhirendra Singh, a BJP worker said to be close to party MLA Surendra Singh. A stampede followed after the shooting that has been captured in a video.

Dramatic visuals, shared by news agency ANI, show a large number of people on a field as three rounds are fired. People are seen panicking and running frantically in the 5-second video.

The victim was allegedly shot at a meeting in Durjanpur village after an official cancelled a meeting on allotment of ration shops due to a dispute between the members who had gathered there, SP Devendra Nath told news agency PTI.

The meeting was held in a tent, where a large number of people gathered. Administration and police officials were also present there, local residents told PTI. 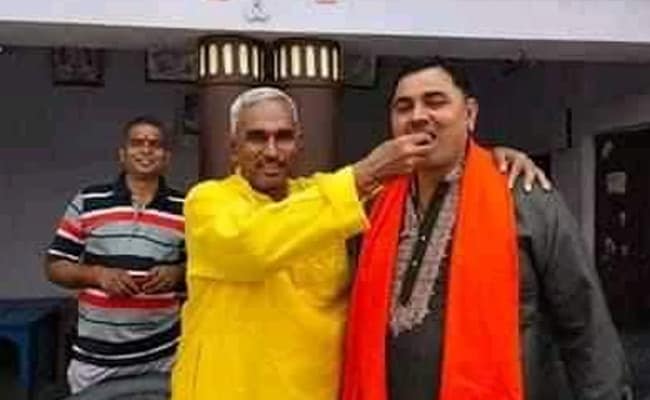 MLA Surendra Singh confirmed that the accused heads the BJP's ex-servicemen's unit in Ballia and said such an incident "can happen anywhere."

"This is a casualty that can happen anywhere. In this incident, there was stone-pelting from both sides. The law will take its own course in the matter," the BJP legislator said.

A police case has been registered against 15-20 people on the complaint of the victim's brother. No arrest has been made yet.

Yogi Adityanath ordered the suspension of the sub-divisional magistrate, a top police official and others soon after.

"Taking serious note of the incident, Yogi Adityanath directed that SDM (sub-divisional magistrate), CO (circle officer) and police personnel present on the spot all be suspended immediately and strictest action should be taken against the accused," Additional Chief Secretary, Home, Awanish Kumar Awasthi said in Lucknow.

"The role of the officers shall be investigated and if responsible criminal action shall be taken," he said.

A sizeable police force has been deployed in the village to maintain law and order, police said.