Kuldeep Singh Sengar was found guilty of kidnapping and rape and will be sentenced tomorrow with the maximum possible punishment being life imprisonment; a second accused - Shashi Singh - has been acquitted

Expelled four-time BJP MLA Kuldeep Singh Sengar was today convicted of kidnapping and raping a young girl from Uttar Pradesh's Unnao district two years ago. In the long-awaited verdict to a case that shocked the nation and included an alleged assassination attempt - reportedly orchestrated by Kuldeep Sengar while he was behind bars - the judge praised the rape survivor for "fighting against a powerful person" and slammed the foisting of false cases against her family. The judge also questioned the Central Bureau of Investigation (CBI) over delays in filing a chargesheet.

Sentencing is scheduled for tomorrow with the maximum possible punishment being life imprisonment. A second accused - Shashi Singh, who was accused of taking the rape survivor to Kuldeep Singh Sengar - has been acquitted on "benefit of doubt".

District Judge Dharmesh Sharma heard the case at Delhi's Tis Hazari court on a day-to-day basis from August 5 after it was transferred to Delhi from a Lucknow court on the Supreme Court's directions.

In a 10-page judgement that included criticism of the CBI and a searing indictment of socio-cultural norms in the country, the judge said the rape survivor, then a minor, had suffered from "patriarchal approach" that brushed aside the issue of sexual violence against children.

"In my considered opinion this investigation has suffered from patriarchal approach or inherent outlook to brush the issue of sexual violence against the children under the carpet... apart from exhibiting lack of sensitivity and humane approach," the verdict read. 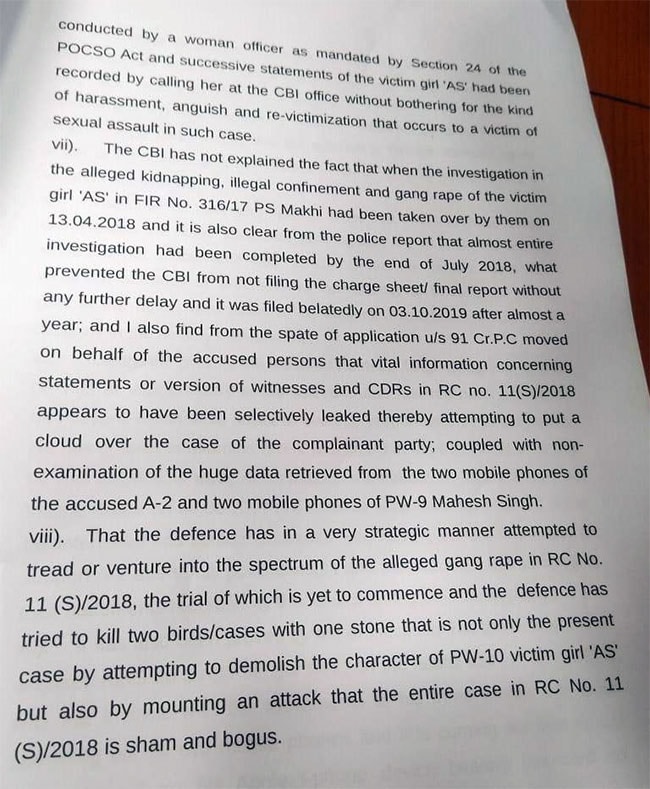 The judge also lashed out at the insensitivity of investigating officers in repeatedly summoning the rape survivor to the CBI offices without concern for the trauma she was facing.

"The investigation has not been conducted by a woman officer, as mandated by POCSO Act, and successive statements (were) recorded by calling her to CBI office without bothering about harassment, anguish and re-victimisation that occurs to a victim of sexual assault," he declared.

The verdict went on to say the testimony of the young woman had been "unblemished, truthful and of a sterling quality" and the court had no hesitation in concluding she had been sexually assaulted.

BJP MP and Union Minister Smriti Irani, whose colleague Sakshi Maharaj - the parliamentarian from Unnao - had repeatedly courted controversy by appearing to publicly support Kuldeep Sengar, reacted to the verdict after she was tagged in a tweet. She said "law has taken it course and I'm grateful that judicial processes continue to ensure protection of women and children".

To presume that I would stand by anyone irrespective of their politics on issues of rape is abhorrent. The law has taken its course and I'm grateful that judicial processes continue to ensure protection of women & children. https://t.co/esCN06UysA

Delhi Chief Minister Arvind Kejriwal has said he hopes Kuldeep Singh Sengar will serve his full term of punishment and no attempt will be made to save him.

The Unnao rape case and its fallout became a saga of police callousness, administrative neglect and the harassment of a young girl and her helpless family by a politician who seemed to enjoy leniency at every step; despite sharp criticism the ruling party acted only a year after his arrest for rape.

Only last year Kuldeep Sengar, shortly after accusations were made, taunted the cops and the CBI.

"Anybody can probe the case....whether CBI or any other probe agency...There is no rape case.. it's a case of defamation...," he said with a smirk while brandishing the FIR.

The rape complaint itself was only registered after she went public last year, staging a protest outside Chief Minister Yogi Adityanath's home and threatening to set herself on fire if she was not heard.

She took the desperate step after her father was thrashed by Kuldeep Sengar's brother, allegedly framed in an illegal arms case and arrested on April 3 last year. He died while in judicial custody a few days later, on April 9.

Earlier this year the girl had written to the Supreme Court alleging grave danger to her life and those of her family members. The letter related incidents between July 7 and 8, when some people allegedly associated with Sengar threatened her family

In July another horrific twist to an already tragic case was revealed after the rape survivor was travelling with her advocate and two aunts when their car was hit by a speeding truck, with blackened number plates, in Uttar Pradesh's Rae Bareli district. Two of her aunts - one of whom was a witness to the rape - died in the accident. 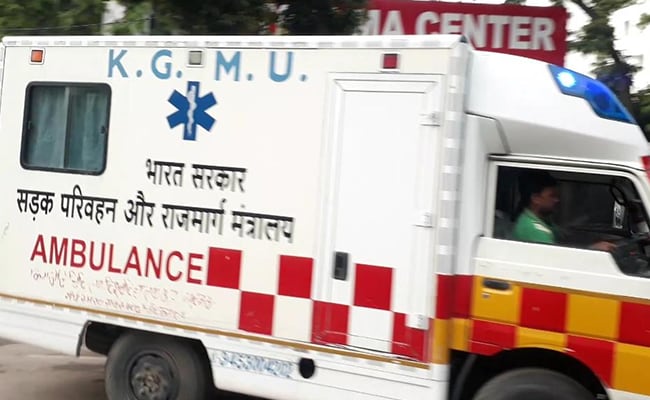 The rape survivor's family had alleged the crash was a "plot to eliminate" her. None of the security personnel deputed to guard her accompanied her on that fateful trip. According to a first information report (FIR) filed by her uncle after the accident, police personnel on her detail kept Kuldeep Sengar informed about her travel plans.

The young girl was airlifted to Delhi's AIIMS and was only released in September.

She and her family have been provided with CRPF security as per top court's orders and have been shifted to rented accommodation in Delhi with assistance from the Delhi Commission for Women (DCW).

The trial in four other cases - framing of the rape survivor's father in the illegal arms case and his death in judicial custody, conspiracy of Sengar with others in the accident case and a separate case of gangrape of the rape survivor by three others - are still ongoing.