The top court's notification comes after the Unnao rape survivor's doctors, on Saturday, described her condition as "critical but stable". The doctors also said that she had contracted pneumonia

The Unnao rape survivor, who was admitted to a Lucknow hospital with critical injuries after the car she, her family and her lawyer were travelling in was rammed by a truck with blackened number plates, has been airlifted to AIIMS in Delhi, after the Supreme Court's order today. Uttar Pradesh police created a nearly 15-kilometre-long green corridor (a stretch of road free of traffic) to transport her from the trauma centre to the airport.

The Supreme Court had initially deferred the decision on moving the rape survivor to Friday, after the girl's family said they had not reached a consensus on the matter. Soon after, however, the family's lawyer, D Ramakrishna Reddy, appeared before a bench of Justices Deepak Gupta and Aniruddha Bose and said the mother wanted her daughter to be shifted to AIIMS.

Earlier today doctors at the King George's Medical University in Lucknow said the rape survivor's condition was "improving" and that the process of taking her off the ventilator had begun.

"The Unnao rape survivor (is) conscious... improving. She is following instructions and her eyes are open. Her fever has lessened. The process of taking her off ventilator has started. Blood pressure continues to be a concern," a letter released by the hospital said. 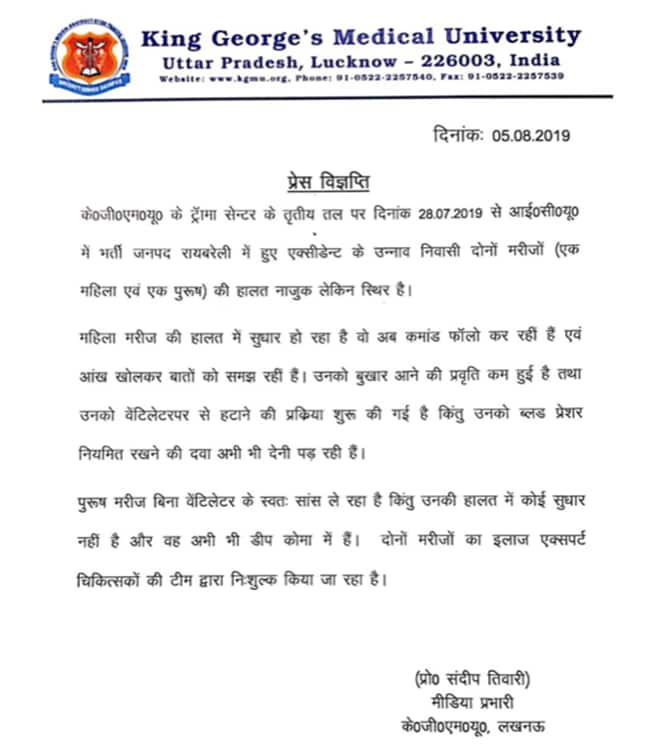 The top court's notification to shift the survivor came after her doctors, on Saturday, described her condition as "critical but stable". The doctors also said she had contracted pneumonia.

The lawyer -- admitted to the same hospital as the rape survivor --  has been taken off the ventilator but is still in a deep coma. He will also be airlifted to AIIMS, either later today or tomorrow.

The 19-year-old woman, who has accused expelled BJP lawmaker Kuldeep Singh Sengar of raping her at his residence in 2017, was travelling with her advocate and two aunts on July 28 when their car was hit by a speeding truck in Uttar Pradesh's Rae Bareli district. Two of her aunts - one of whom was a witness to the rape - died in the accident, which many claim was orchestrated by the politician and his brother - Atul - to get back at the rape survivor.

None of the security personnel deputed to guard the survivor accompanied her on Sunday's trip. According to a first information report filed by the her uncle after the accident, police personnel on her security detail kept Kuldeep Sengar informed about her travel plans.

The CBI, which has been spurred into action by the Supreme Court's deadline, has conducted raids across 17 places in Uttar Pradesh. A team has also gone to Sitapur Jail, where Kuldeep Sengar has been lodged for a year, to check visitors' records.

Last week, in a series of orders that highlighted its apparent distrust of Chief Minister Yogi Adityanath's government and its ability to protect the teenage rape survivor, the court ordered all cases linked to the Unnao rape survivor be shifted out of Uttar Pradesh and to Delhi. The court also demanded CRPF protection for the girl and her family and Rs 25 lakh compensation to the survivor.