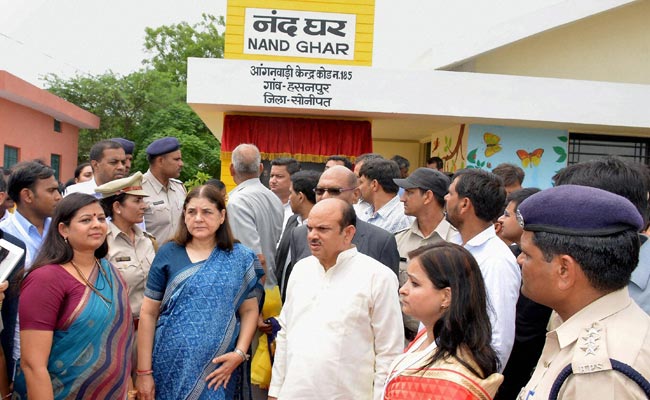 Union Women and Child Development Minister Maneka Gandhi at the inauguration of an Anganwadi Centre Nand Ghar in Sonepat. (Press Trust of India)

Sonepat: The Centre today launched the country's first modernised anganwadi centre at Hasanpur village in Sonepat, which will be replicated at 4,000 other places and is likely to change the face of government's 40-year-old children and women-oriented scheme.

The Sonepat facility, built in partnership with private mining firm Vedanta at a cost of Rs 12 lakh, is part of Central government's Nand-Ghar Yojna that aims at transforming the anganwadis centers, which accommodate around 50 children in daytime every day, by making them equipped with latest facilities.

"Our aim is to make anganwadis a community center for children and mothers. We provided solar-power system to make them stand-alone, and television for teaching purpose. And above all they should be pretty so that people feel like coming there," said Union Women and Child Development (WCD)Minister Maneka Gandhi after inaugurating the building.

The Nand-Ghar Centers, involving an area of 780 square feet, will be constructed by state-run National Buildings Construction Corporation Limited, as per the guidance of the WCD Ministry. The cost of construction will be shared by the Ministry and Vedanta, while the land will be provided by the Gram Panchayat. The building will have a singular design.

Based on the concept of 'Building as a Learning Aid' piloted by UNICEF, the centers would attempt to increase attendance of children. These will be in addition to the existing anganwadi model of the Ministry for efficient delivery of Integrated Child Development Scheme.

Under the scheme, supplementary nutrition is provided to children in the age group of 0-6 years and to pregnant/lactating mothers with main objective to fight the problem of malnutrition.

A network of 13.4 lakh anganwadis have been established in every village, town, city and other habitations.

As per the ICDS scheme guidelines, an modernised anganwadi centre must have a separate sitting room for children/women, separate kitchen, store for food items and dedicated space for children to play.

It was, however, noted in a recent audit by the government that most of the centres lacked essential infrastructure for maintenance of hygiene and sanitation.

Many of them were also found working under trees, in open spaces, dilapidated buildings and temporary structures.

Modernised anganwadi centres were started by the government in 1975 as part of the ICDS programme to combat child hunger and malnutrition.