Amit Shah hit out at the Aam Aadmi Party (AAP) government in Punjab and said that in just three months, its face of "deceit and deception has been exposed". 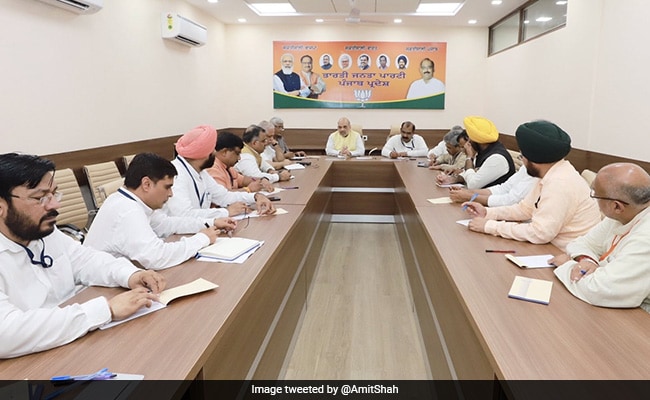 Amit Shah hit out at the Aam Aadmi Party government in Punjab.

Union Home Minister Amit Shah on Saturday said his Bharatiya Janata Party (BJP) will play a big role in the politics of Punjab and will emerge as the largest party in the state in the 2024 Lok Sabha polls.

"BJP will play a big role in the state politics...Whosoever wants to join hands with us will have to be a small partner and we will also welcome those who want to come into the BJP fold," he said.

"I want to assure the people of Punjab that the Centre and the country stand with every citizen of Punjab and this crisis situation in Punjab will not be allowed to worsen," he said.

Amit Shah also hit out at the Aam Aadmi Party (AAP) government in Punjab and said that in just three months, its face of "deceit and deception has been exposed".

"One shudders to think what will it (AAP) do in five years," he said as he was apparently hitting out at the AAP government over the law and order situation.

Amit Shah assured his party workers that the BJP will emerge as the largest political party during the 2024 Lok Sabha polls as people are "dissatisfied" with the AAP and they are waiting to root them out in the next elections.

Amit Shah, while putting all political rumours to rest, said the BJP will contest elections on its own and whosoever wanted to join it will have to contest on its 'lotus' symbol.

"We are here to win and bring prosperity to the state," he said.

Punjab BJP chief Ashwani Sharma said the party is committed to safeguarding the interest of Punjab and will not allow anyone to disturb peace.