India's expectation from the COP 25 is that we should concentrate more on action on the Paris agreement, and not broach up new issues and new subjects, Environment Minister Prakash Javadekar said. 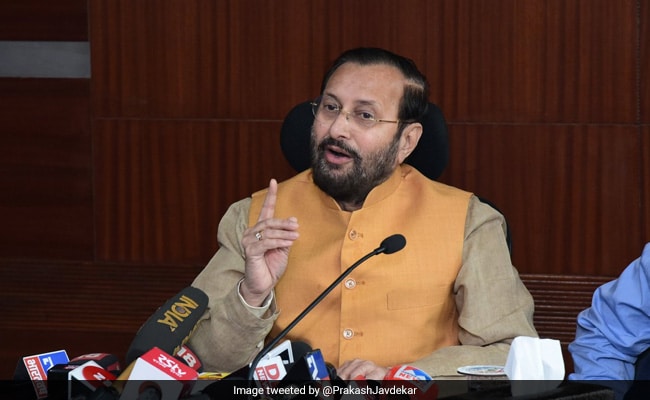 Prakash Javadekar says India has reduced its energy intensity by 25 per cent. (File)

India said on Monday that the UN climate conference under way in the Spanish capital should concentrate more on action on the Paris climate agreement and not bring up new issues as it will be "futile" to talk of new targets and ambitions unless the 2015 deal is implemented.

"India's expectation from the COP 25 is that we should concentrate more on action on the Paris agreement, and not broach up new issues and new subjects," Environment Minister Prakash Javadekar, who is here to attend the climate summit, said.

The Paris accord was adopted by 195 parties at the UN climate conference "COP 21" held in the French capital in 2015 with an aim to reduce the hazardous greenhouse gas emissions. Nineteen members of the G20, except the US, have voiced their commitment to the full implementation of the deal.

The objective of the Paris Agreement is to prevent an increase in global average temperature and keep it well below 2 degree Celsius.

Briefing the media at the India Pavillion set up at the 25th session of Conference of Parties under the UN Framework Convention of Climate Change (UNFCCC COP25), which started on December 2, Mr Javadekar said that reports by the Intergovernmental Panel on Climate Change (IPCC) and others have found that India is among the top five in performing according to the Paris Agreement.

"We are walking the talk, we have reduced our energy intensity by 25 per cent, and we are very sure that we will outdo our promise of 35 per cent even by 2030," Mr Javadekar said.

The minister said that India is "probably" one of the few countries where green cover is increasing.

"My latest figure is we have increased the forest, and tree cover outside forests at 13,000 square kilometres. It is huge compared to any country in the world, and therefore India wants all countries to first follow the Paris (agreement). It will be futile to talk of new targets, ambitions and programs unless we carry out our implementation of Paris (deal)," he said.

He said India will not forget the Paris agreement as it was a "historical promise" and the Kyoto Protocol parties must take the responsibility.

"That is our position and if they want that they will declare their targets from pre-2020 actions in this COP and that they will require two or three years to implement it.

"That can be adjusted, but pre-2020 cannot be sidelined or cannot be used back, and new themes are introduced every time. So India is very firm on acting on Paris agreement," he said.

(Except for the headline, this story has not been edited by NDTV staff and is published from a syndicated feed.)
Comments
UN climate conferencePrakash JavadekarParis climate agreement