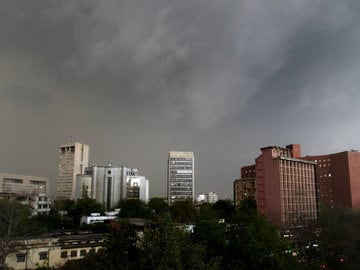 New Delhi: Strong tremors were felt in Delhi and the National Capital Region (NCR) after two earthquakes hit the city within an hour of each other today.

The first earthquake occurred at 12:41 am, resulting in tremors lasting for three-four seconds in parts of the national capital.

"The earthquake measuring 3.1 at the Richter scale hit after 12.30 a.m (local time) here. The epicentre of the earthquake feels to be in the national capital territory. However, we are still analysing the data," an Indian Meterological Department (IMD) official told IANS.

An hour later, at 1:41 am, strong tremors were felt in Delhi and adjoining satellite cities Noida and Ghaziabad after another quake measuring 3.3 on the Richter scale struck the NCR.

Many in the national capital rushed out of their houses after the tremors.

"We felt the earthquake we are very scared. So we have come out of our homes," said Mahesh.

"We felt the tremors four times. We have come out. The children are afraid," said Deepak.

Micro-blogging site Twitter has been abuzz with tweets on tremors.

Promoted
Listen to the latest songs, only on JioSaavn.com
"Yes, tremors in Delhi just a minute ago. Like thunder coming from the ground!" tweeted Jamal Shaikh.

"This must be the strongest earthquake tremor I have ever felt. It was like the earth shivering. #Delhi (sic)" tweeted a person with Twitter handle @DilliDurAst.