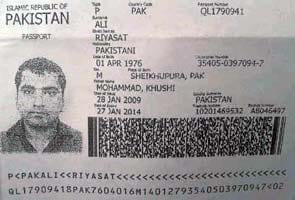 Mumbai: Arrested Lashkar-e-Taiba (LET) operative Sayed Zabiuddin Ansari alias Abu Jundal has told interrogators that after the Maharashtra ATS had seized arms in Aurangabad in 2006, he managed to escape to Pakistan via Bangladesh with the help of two Indian operatives of the terror organisation.

"In May 2006 when he was on the run in Aurangabad arms haul case, he escaped to Bangladesh from where he got a fake passport in the name of Saeed with the help of LET operatives there. From there he had flown to Pakistan," a senior crime branch official said.

Jundal's "hassle-free" journey from Bangladesh was organised by the LET bosses in Pakistan, the official added.

In the Aurangabad arms case, a Maharashtra ATS team had chased a Tata Sumo and an Indica car on the Chandwad-Manmad highway on May 8, 2006, and arrested three terror suspects, while seizing a huge cache of 30 kg RDX, 10 AK-47s and 3,200 bullets.

The Indica, which was allegedly driven by Jundal, who hails from Beed district of Maharashtra, however, managed to give police the slip. Jundal then allegedly drove to Malegaon and handed over the vehicle to an acquaintance there.

Investigators had later seized 13 kg of RDX and six AK-47s from Malegaon and 50 grenades from Ankai village near Manmad in Nashik district.

According to police, as of now as many as 21 terror suspects are behind the bars in connection with the Arms haul case.

"From Malegaon, Jundal went to Aurangabad by road route and took a shelter in a mosque," the official said, adding that "Jundal was helped by his associate in Aurangabad to escape to Kolkata where one more aide ensured his journey to Murshidabad district of West Bengal and then to Bangladesh".

In Pakistan, Jundal had undergone trainings called "Daura-E-Aam" and "Daura-E-Khas" in 2006 at LET terror camps, the same trainings obtained by Ajmal Kasab, the lone surviving Pakistani gunman of the 26/11 strike.

Promoted
Listen to the latest songs, only on JioSaavn.com
Jundal was arrested by Delhi Police in late June after being deported from Saudi Arabia. He was arrested by Mumbai Police on July 21 for his alleged complicity in the 26/11 terror attack case and was remanded in police custody till July 31 by a local court.