Tune In At 9 pm, Tweets PM On His Journey In Discovery's "Man vs Wild" 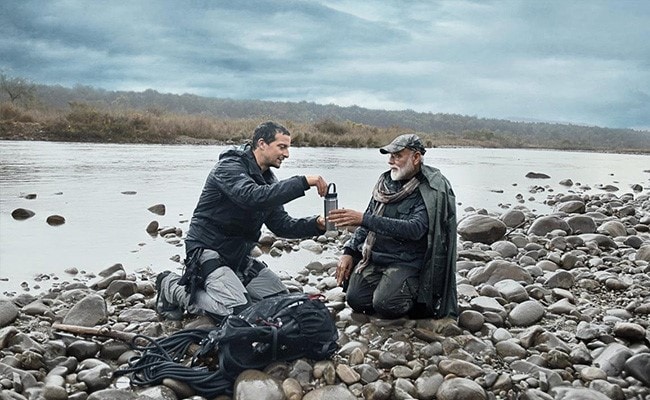 Man vs Wild: The show of PM Narendra Modi and Bear Grylls will air tonight on Discovery Channel

"What better than the lush green jungles of India, in the midst of Mother Nature to throw light on environmental conservation and climate change... Do join at 9 PM tonight!" PM Modi tweeted.

The Man vs Wild adventurer, who has also hosted a show with former US President Barack Obama in the wilderness of Alaska, will tackle challenges of surviving in the wild with PM Modi in the show that has been widely publicised ahead of its broadcast.

Discovery Channel, which will air the show, has said the special episode was shot in Jim Corbett National Park in Uttarakhand and it will be a "frank and freewheeling journey" that will throw light on wildlife conservation.

In the latest four-minute promo released by Discovery Channel, Mr Grylls is seen teaching PM Modi how to make a spear that he can use to protect himself in case they encountered a tiger in the woods. "You are the most important man in India and my job is to keep you alive. If a tiger comes, so this is your protection," Mr Grylls said, as he showed PM Modi how to use a spear.

To this, the Prime Minister replies, "My upbringing does not allow me to take a life. However, I will hold on it (the spear) since you insist."

PM Modi's message on using the programme to spread awareness on environmental conservation and climate change comes at a time when nations have raised concerns over rising global temperatures.

Abnormal heatwaves have been felt across continents, from the relatively colder northern regions of Europe to North America. Ice sheets have melted at an alarming rate in Greenland.

Scientists have also indicated there could be a link between climate change and rising incidences of floods.