PM Modi With Bear Grylls In "Man vs Wild": When And Where To Watch

"People across 180 countries will get to see the unknown side of PM @narendramodi as he ventures into Indian wilderness to create awareness," tweeted Bear Grylls. 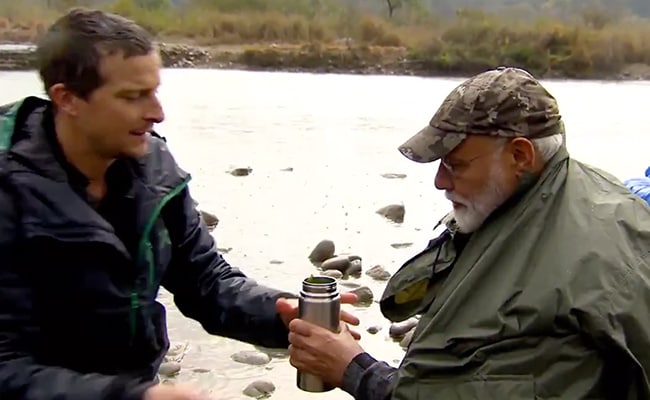 Prime Minister Narendra Modi will join adventurer Bear Grylls in an episode of "Man vs Wild" - the hugely popular show on Discovery Channel - that will air at 9 tonight.

"People across 180 countries will get to see the unknown side of PM @narendramodi as he ventures into Indian wilderness to create awareness about animal conservation & environmental change," Edward Michael Grylls, better known as Bear Grylls, had tweeted last month, sharing a teaser of the episode.

"PM Modi is a man who cares deeply about the environment. That is why he came on this journey with me. He has actually spent time in the jungle as a younger man and I was surprised how comfortable he was out there and how calm he was," the 45-year-old British adventurer and show host said in an interview to news agency ANI on Saturday.

#WATCH Bear Grylls in Wales(UK): PM(Modi) is vegetarian, so there was going to be no eating of grubs or anything. But in the wild, you can survive very well off berries, roots, plants and certainly, PM spent his younger years in the wild, so he was very comfortable with that pic.twitter.com/2maEG4YXKg

Mr Grylls spoke about his interactions with PM Modi and former US President Barack Obama, saying it was "really heartening to see such powerful men" standing up for protecting the environment.

"I have had a huge privilege of taking President Obama on a trip to Alaska a few years ago to show him the effects of climate change close up. They were similar, in the sense of being iconic global world leaders, but (trips were in) different terrains," he said.

"Alaska was very cold, but where we went with Prime Minister Modi was a rainforest, hot and humid. What was similar was that they were there for the same purpose- for driving this message of "we have to protect the environment. We have got to back big conservation projects and look after our world," he added.

Mr Grylls had filmed an episode of his show with Obama in Alaska in 2016.