Train services between Tripura, Mizoram and the rest of the country have been affected due to rain and landslides. 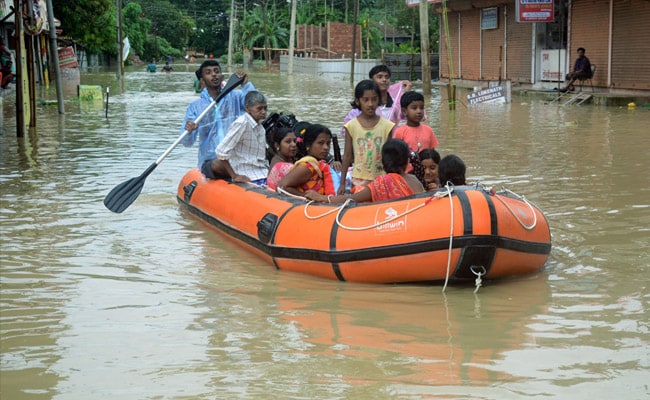 Over 15,000 people have shifted to relief camps and other safer places in Tripura and Mizoram due to flooding of low lying areas and villages by rain, officials said on Sunday.

Train services between Tripura, Mizoram and the rest of the country have been affected due to rain and landslides.

Bodies of three people, drowned in swollen rivers, were retrieved by rescuers.

According to officials, over 12,000 people have taken shelter in 38 relief camps on the outskirts Agartala, and Jirania, Kalyanpur and Teliamura in western Tripura.

"Water in several rivers, including Howrah, has crossed the danger level. We have taken precautionary measures to deal with any eventuality," he said.

Agartala and its outskirts have been badly affected due to the continuous rain since Saturday. "Around 200 mm rainfall was recorded in Agartala since Saturday against the normal 11.4 mm," an official of the Tripura State Disaster Centre said.

The body of a man was recovered on Sunday from Muhuri river in southern Tripura. He apparently drowned while collecting woods from the flooded river on Saturday.

Chief Minister Biplab Kumar Deb has asked Chief Secretary Usurupati Venkateswarlu and other officials to remain alert to deal with the situation.

In Mizoram, over 3,000 people have taken shelter in safer places in the Lunglei district as Khawthlangtuipui river and its tributaries submerged nearly 400 houses.

The bodies of two youth, who drowned in Tlawng river, were recovered by the State Disaster Response Force personnel.