Chief Minister Biplab Kumar Deb urged the people of the state to "go back to their old cultural roots". 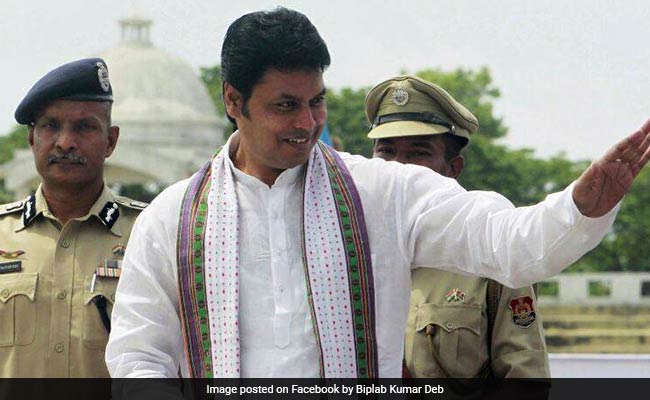 Mr Deb also urged the people of the state to "go back to their old cultural roots" .He alleged that the previous Left Front government led youths towards addiction and drugs in their 25 years of rule in Tripura.

Mr Deb claimed most road accidents in Tripura are due to drug addiction as police reports suggest many youths had used euphoric drugs before driving vehicles.

The chief minister said his government would change the state capital Agartala into a smart city in next two years.

The CM stressed on timely completion of projects under Agartala Smart City Mission including public WiFi services, smart bus stops, pump houses, four lane roads and asked officials to engage expert agencies from other states.
"We promised people smart city and other things in our vision document. We shall achieve all of them ahead of deadline," he said.

As part of the Agartala Smart City Mission, a pump house would be constructed at Banamalipur  the chief ministers home turf at a cost of Rs. 1.47 crore, officials said.

Municipal sewerage drains would also be constructed from Orient Chowmuhani to Katakhal at a cost of Rs 2.64 crore. Apart from these double barrel sluice gates would be set up on Katakhal canal and drainage system of the city would be developed, they said.

"In a review meeting on Agartala smart city project yesterday I found tenders were floated on most sectors. Work would be started soon," Mr Deb said.

Agartala Municipal Commissioner Sailesh Kumar Yadav told the chief minister at the meeting that 90 per cent work was complete for constructing embankment along River Howrah from Chandrapur till Aralia bridge in the city.