Trinamool Vs BJP Over Recognition To Illustrious "Sons Of Bengal" 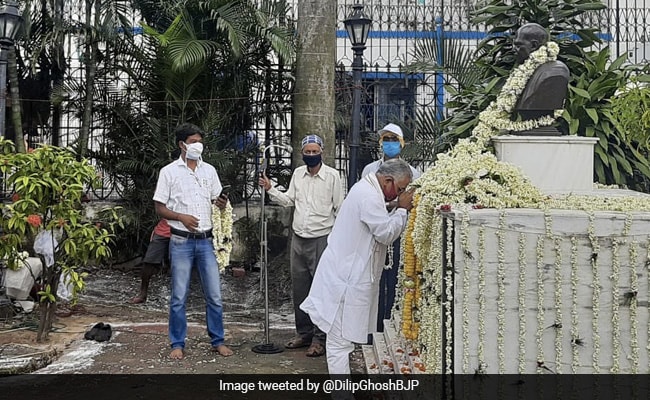 The ruling Trinamool Congress and the BJP hit out at each other on Wednesday over giving due recognition to the illustrious sons of Bengal, as leaders of the two parties paid tributes to Syama Prasad Mookerjee on his death anniversary.

"We demand that the mystery involving the death of Syama Prasad Mookerjee be uncovered," Mr Ghosh said. Claiming that regional parties in Bengal have never given the great sons of the state the recognition they deserve, he said the BJP has started working towards it.

Meanwhile, Mr Hakim, while garlanding a bust of Mookerjee in south Kolkata, said the policy of the BJP has always been "to use and throw".

"After a few days, they will have no interest in the distinguished sons of Bengal, including Mookerjee," the TMC leader said.

He also asserted that the BJP did not gain anything in West Bengal by "using" the name of Mookerjee on several occasions in the run-up to the assembly polls.

Mr Ghosh later led a demonstration at Hazra crossing in the metropolis to protest against the alleged refusal by police to organise a blood donation camp to mark the BJP ideologue's 68th death anniversary.

The state BJP said the camp, which has been held for the last 42 years on this day, was disallowed due to "narrow political interests" of the TMC.

The camp was to be set up at Jatin Das Park, which is a kilometre away from Chief Minister Mamata Banerjee's residence.

Syama Prasad Mookerjee had died under detention in 1953, While the government then said his death was due to health reasons, Jana Sangh and later the BJP have often questioned the claim.