Senior Trinamool Congress leader Sabyasachi Dutta has said he will join the BJP on Tuesday in the presence of its national president Amit Shah. 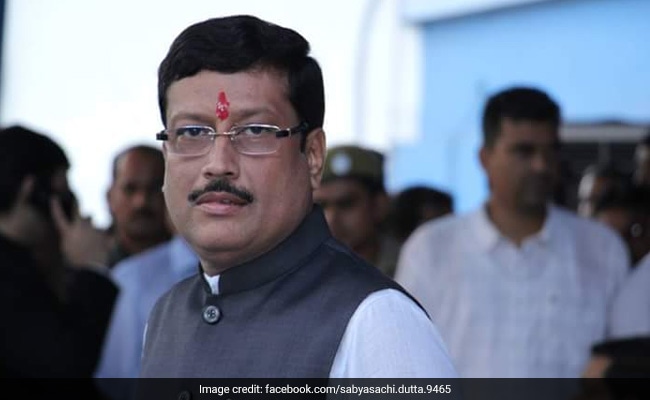 Sabyasachi Dutta resigned from the post of Bidhannagar Municipal Corporation mayor in July this year.

Senior Trinamool Congres leader Sabyasachi Dutta, who was stripped of his decision-making power as Bidhannagar mayor for alleged anti-party activities, Monday said he will join the BJP in the city presence of its national president Amit Shah.

Mr Shah is scheduled to address a seminar on National Register of Citizens and Citizenship (Amendment) Bill at Netaji Indoor Stadium in Kolkata on Tuesday.

"I will join the BJP tomorrow at Amit Shahji's programme at Netaji Indoor Stadium. The TMC is no longer a party of the masses, it has become a family enterprise. The people have already rejected TMC," Mr Dutta, an MLA, told news agency Press Trust of India over phone.

"We will welcome him (Dutta), if he is joining tomorrow. We are happy that he is joining. The TMC is a sinking ship and in the next few months more leaders from that party will abandon it," Mr Ghosh said.

Mr Dutta, TMC MLA from Rajarhat-New Town who was seen with BJP leader Mukul Roy over the past few months, had resigned from the post of Bidhannagar Municipal Corporation mayor in July this year.

Since the 2019 Lok Sabha poll results, seven TMC MLA and two Congress and CPI(M) MLAs have joined the saffron camp.

Reacting to the development, TMC secretary general Partha Chatterjee said the party is not at all bothered about Mr Dutta's proposed switchover to the BJP.

"We (TMC) have no relation with Dutta for the last several months. It hardly bothers us," He said.

Mr Dutta was in the eye of a political storm after he participated in an agitation against West Bengal's power department and slammed the TMC government for not fulfilling the employees' demands for increasing their salaries.

The party leadership is also annoyed with Mr Dutta over his meetings with senior BJP leader Mukul Roy. Mr Dutta had, however, said that Mukul Roy visited him as an elder brother.