Kailash Vijayvargiya shared a photo of Ms Banerjee, in which she is seen cooking in a tribal village, on Twitter and, in an accompanying statement, said in Hindi, "Didi has already started doing the work she will have to do after 5 months." 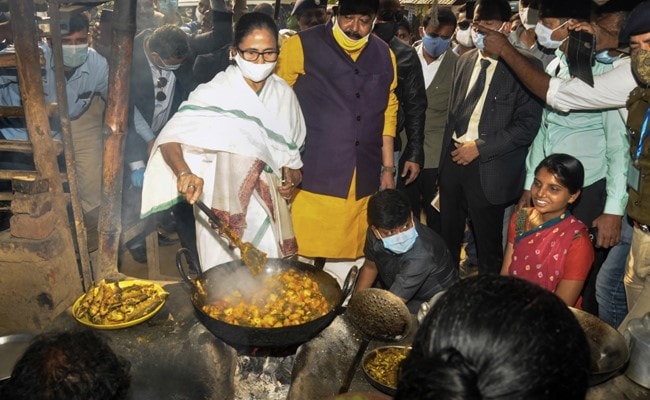 BJP's Kailash Vijayvargiya had commented on Mamata Banerjee's photo at a tribal village in Bengal.

Mr Vijayvargiya shared a photo of Ms Banerjee, in which she is seen cooking in a tribal village, on Twitter and, in an accompanying statement, said in Hindi, "Didi has already started doing the work she will have to do after 5 months."

Ms Banerjee's photo was taken at Ballavpur village where she had stopped for some time while returning to Kolkata from Birbhum district last week. The assembly election in the state is due in April-May this year.

Reacting sharply to Mr Vijayvargiya's post, TMC MP Kakoli Ghosh Dastidar claimed that the country is filled with misogynists from the BJP who think the place of a woman is in the kitchen.

"If you are a woman and you have aspirations to join active politics, remember - our country is plagued with MISOGYNISTS from BJP like these who plan to send women back to the kitchen," Ghosh Dastidar tweeted.

"Can't imagine the lack of respect that women in Kailash Vijayvargiya family must be facing," the doctor turned politician said.

Actor turned party MP Nusrat Jahan said "Shri Kailash Vijayvargiya's comments are OUTRIGHT MISOGYNISTIC! BJP crossed the mark by insulting every single woman who cooks, provides for families and has aspirations. Mamata Banerjee is the only female CM in India at present and once again, BJP targets and abuses her. #Shameful."

BJP Mahila Morcha state president Agnimitra Paul, however, wondered how that tweet of Vijayvargiya could be misogynistic.

"Cooking cannot be a demeaning job. Our mothers and grandmothers cooked for days to sustain the family. Millions of women - working or housewives - cook with passion for their near ones every day. There are thousands of male chefs who are proud of their work. How can the tweet be demeaning or misogynistic?" she told PTI.

Ms Paul, also a fashion designer, claimed that at a meeting in the past, TMC MP Abhisek Banerjee had asked the crowd if they will wear sari and bangle if attacked.

"Isn't that demeaning to Indian women? Wearing sari and bangle is the pride of Indian women. What would the TMC women MPs have to say about that?" Ms Paul asked.

Mamata Banerjee made a sudden detour and entered the tribal village while returning to Kolkata after wrapping up a two-day visit to Bolpur in Birbhum district on December 30.

She joined tribal women and cooked vegetables during the surprise visit to the village.

Mr Vijayvargiya on that day had said the chief minister's sudden visit to the village was nothing but a "drama". His alleged misogynistic tweet was posted on the next day.