2 Teens, Stuck Amid Heavy Snowfall During Trekking, Die In Himachal

After the deaths, former Himachal minister Sudhir Sharma accused the government of having a poor disaster management mechanism in the state. 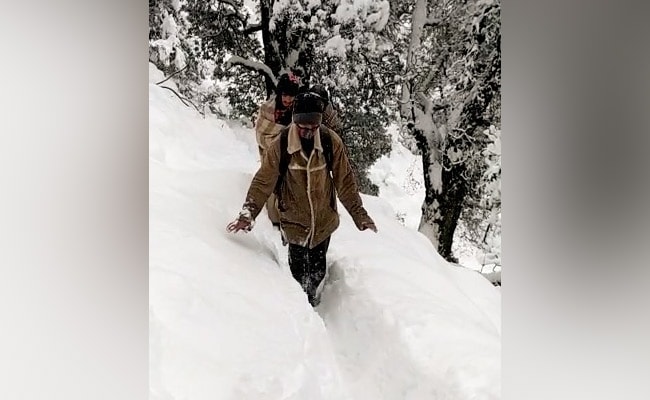 The body of the second boy is likely to be brought back on Tuesday.

Two teenage boys, stuck in heavy snowfall with two others during trekking in the Dhauladhar mountain range in Himachal's Kangra district, died of hypothermia, police said on Monday.

Two other boys were rescued by a police team and have been admitted to Dharamshala Zonal Hospital, Kangra police officer Kaushal Sharma said.

The police identified the boys as Rohit, 16, a resident of Slate Godown village near Dharamsala and Monty, 18, of Nurpur village in the district.

Two others who are undergoing treatment at the hospital were identified as Rohit, 18, and Satyam, 17, both of Slate Godwan village, the police said.

The police launched the rescue operation amid heavy snowfall after the relatives of the boys approached them.

On reaching the spot, the police found one of the boys already dead. They were returning with the other three when  the other died on the way to the hospital, Mr Sharma said.

The body of the second boy is likely to be brought back on Tuesday.

After the death of the two teenagers, former Himachal minister and Congress' national secretary Sudhir Sharma expressed grief over the incident and accused the government of having a poor disaster management mechanism in the state.

"This is not the first time that such an incident has happened. Some time back also two persons had lost their lives near Dharamsala in similar circumstances," he said.

He said the Dhauladhar Range is an easily approachable snow line in Asia and there are many treks in this area and not only the locals but tourists also visit this place for trekking.

The trek to Dhauladhar is known for the Alpine trekking route, which is why it is a centre of attraction, the Congress leader said, adding the government, however, has made no proper arrangement to rescue trapped trackers.