COVID-19 India: The All India Institute of Ayurveda was inaugurated by Prime Minister Narendra Modi in October 2017. It has a 200-bed referral hospital for facilitating clinical research, 25 specialty departments and 12 clinics with eight inter-disciplinary research laboratories. 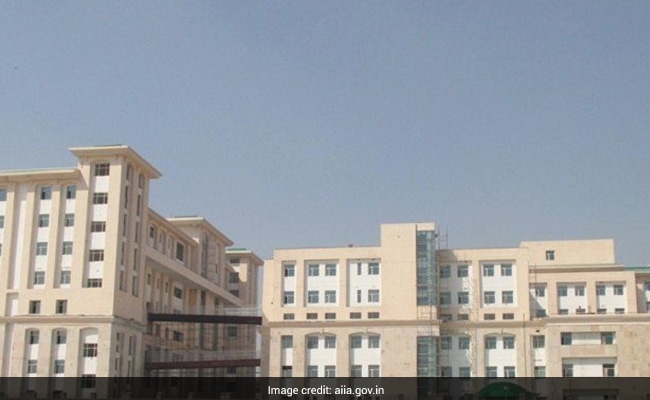 Amid a controversy over Yoga guru Ramdev's remarks on allopathy and doctors, the head of the government-run All India Institute of Ayurveda (AIIA) has said the facility has successfully treated at least 600 Covid patients by implementing both the systems of medicine.

Prof Tanuja Nesari said a holistic approach and the integration of ayurveda, allopathy and modern diagnostic technology made it possible.

Patients with mild to moderate symptoms are provided treatment at a Covid health centre in the Central government-run institute. According to the Delhi government's 'Delhi Corona' application, the facility currently has 47 oxygen beds, all of them vacant.

The All India Institute of Ayurveda was inaugurated by Prime Minister Narendra Modi in October 2017. It has a 200-bed referral hospital for facilitating clinical research, 25 specialty departments and 12 clinics with eight inter-disciplinary research laboratories.

"Pure ayurvedic treatment was provided to more than 94 percent of the patients, but allopathy was used wherever required as per the guidelines of the Indian Council of Medical Research. That's the reason for our success... We have adopted a holistic and integrated approach," Prof Nesari, an MD in Ayurvedic Pharmacology, told news agency PTI.

Of the 600 patients, around 200 were admitted during the second wave, she said.

"The best part is that ayurveda and allopathy coexist here. Be it ayurvedic or allopathic, the treatment is guided by tests conducted in laboratories," she said.

"We do not administer any medication blindly. We closely monitor each and every case. This is a modern facility. We have pathology and radiology laboratories. We conduct CT scans, CRP and D-dimer tests regularly," said Prof Nesari, who has in the past worked as CEO of the National Medicinal Plant Board.

Which patients need what kind of treatment is jointly decided by doctors of ayurveda and allopathy. In moderate cases, both ayurvedic and allopathic medications are used, she said.

"First, we give ayurvedic treatment along with oxygen therapy. If the patient's condition doesn't improve, we take the help of allopathy, which involves the use of steroids etc, according to the ICMR guidelines," Prof Nesari said.

The institute has 40 ayurveda doctors and five allopathic doctors. The facility has an ICU, too, and doctors from AIIMS and Rajiv Gandhi Super Specialty Hospital provide online consultation, if required.

"For example, they tell our doctors what they need to do immediately if the oxygen saturation level drops suddenly. Serious cases are referred to AIIMS and RGSSH," the director said.

The AIIA referred one to two percent of its patients to these tertiary care facilities, she added.

The average length of stay at the facility is nine to 10 days. Hospitals have reported that a Covid patient with moderate symptoms remains admitted for 10-14 days, while a severe patient may have to spend up to a month due to dependence on medical oxygen.

Ayurvedic medicines including Suvarnakalpa, Swas Chintamani, Swarna Bhupati are used in case of an emergency, too, and the results have been encouraging, she said.

Ayurvedic interventions and medicines are given based on symptoms. These included Guduchyadi kadha, Nagaradi kadha, Sudarshan Ghanvati, Shanshamani Vati and AYUSH-64, an Ayurvedic formulation developed by the Central Council for Research in Ayurvedic Sciences.

Ramdev was recently forced to withdraw his remarks questioning some of the medicines being used to treat the coronavirus infection and that lakhs have died from taking allopathic medicines for COVID-19", a video clip of which went viral.

The remarks were met with vociferous protests, following which Union Health Minister Harsh Vardhan had asked him to withdraw them.