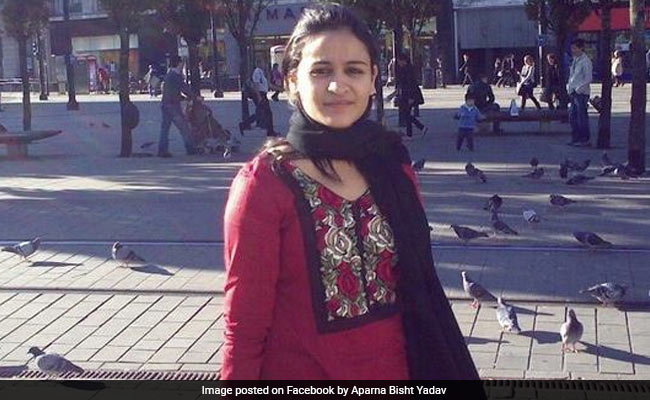 Lukcnow: A contest in Lucknow could become one of the most keenly watched in the Uttar Pradesh election if Chief Minister Akhilesh Yadav picks the candidate his father Mulayam Singh has endorsed for the seat. The BJP has named Rita Bahuguna Joshi, newly acquired from the Congress, to contest from Lucknow Cantt, the seat she won in the last election. The Samajwadi Party is yet to name a candidate, but Mulayam Singh has sought the seat for his second daughter-in-law Aparna Yadav.

But before Aparna Yadav, who is married to Mulayam Singh's second son, Prateek, manages to fight Rita Joshi, she has another battle on her hands - that within her family.

Mulayam Singh, then party chief, had named Aparna almost a year ago as the candidate from the Lucknow Cantt seat for this year's election. She has since been working hard to build a base in the constituency, which the Samajwadi Party has never won.

In the bitter power tussle between Akhilesh Yadav and his uncle Shivpal Yadav - consistently backed by Mulayam Singh - Aparana Yadav was seen as a staunch member of Team Shivpal, now sidelined in the party.

Akhilesh's close aides believe that Aparna Yadav's political ambitions extend to becoming the young face of the Samajwadi Party in place of her brother-in-law and eventually even its candidate for Uttar Pradesh Chief Minister.

If Akhilesh picks her to contest from Lucknow Cantt - he has gone with his father's choice for other seats, like fielding uncle Shivpal from Jaswantnagar - Aparna Yadav faces formidable competition. Rita Bahuguna Joshi is as much Uttar Pradesh political blue blood - she is the daughter of HN Bahuguna Joshi, a former UP chief minister, and has been state chief of the Congress, the party she quit in October after 24 years in it.

Ms Joshi had resigned as the Congress' UP chief in 2012, owning responsibility for the party's poor performance in that year's assembly election, which installed Akhilesh Yadav as Chief Minister. The Congress came fourth winning only 29 of the state's 403 seats, one of those Rita Joshi's seat; she had won by over 20,000 votes.

This time, the Samajwadi Party and the Congress are partners, but Rita Joshi is a BJP candidate.

Sources close to Aparna Yadav say the junior Yadav bahu remains unfazed by the hurdles in her way. "I am 100 per cent sure I will get a ticket from this seat and I will fight hard here and ensure victory for myself and the party," she said a recent function in Lucknow Cantt.

The mother of a three-year-old runs an NGO. Aparna is a post-graduate in politics and international relations from the Manchester University and a trained singer. Her husband Prateek, Mulayam Singh's son from his second wife Sadhna Gupta, runs a real estate business and a chain of gyms. He was recently in the news for his cool ride - a blue Lamborghini Huracan worth around four crores.
Comments
Aparna YadavRita Bahuguna JoshiUP electionslucknow canttUttar PradeshElections 2017