"Till I Am Alive": Aparna Yadav On Being Part Of BJP

She said that she has not left the (Mulayam Singh Yadav) family, but has left the Samajwadi Party for nationalism. We trust PM Modi, she added. 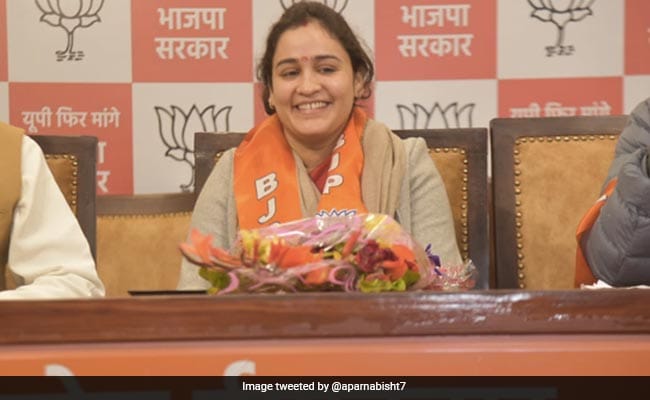 Aparna Yadav said that she would remain a member of the BJP"till she is alive".

The Bharatiya Janata Party (BJP) leader Aparna Yadav, who is the daughter-in-law of the Samajwadi Party (SP) patriarch Mulayam Singh Yadav, has said that those who in the run-up to the polls in Uttar Pradesh had spoken of sending the Chief Minister Yogi Adityanath to 'Gorakhnath Math' will now face the stick (rule of law) while stating that administration will act tough against the mafia.

"It is a matter of pride that Yogi Adityanath has again become the Chief Minister. When I joined the BJP during the UP Assembly elections, some people had said that they have prepared to send Adityanath to the Math. Now when the BJP has formed its government again, it is time for them to face the sticks (Jinhone bola that ki Yogi ko math bhejenge, unpe ab lath bajwane ka kaam hoga)," Ms Yadav said.

Aparna Yadav said that she would remain a member of the BJP "till she is alive".

"I was questioned time and again about why I joined the BJP. I said that till I have the last drop of blood in my veins, I will remain in the BJP because of the party's commitment to nationalism. Prime Minister Narendra Modi's vision is 'Ek Bharat, Shreshtha Bharat'. He wants to make India 'Aatma Nirbhar (self-reliant)' and this vision needs everyone's support," she said.

She said that she has not left the (Mulayam Singh Yadav) family, but has left the Samajwadi Party for nationalism. We trust PM Modi, she added.

The BJP leader asserted that the BJP will firmly promise its poll commitment to act against the mafia and criminals in the state. Criminals have been jailed in the state and they will continue to face the full force of the law, she added.

"Union Home Minister Amit Shah in the BJP manifesto had stated that the state government will not spare the mafia and criminals. The criminals are being sent to jail after the formation of the BJP government in the state again," she said.

Notably, the BJP in its poll campaign had highlighted the improved law and order situation in the state and had attacked the Samajwadi Party over the poor track record under its rule.