Thunderstorm alerts had delayed six arriving flights and one departure flight in Delhi. 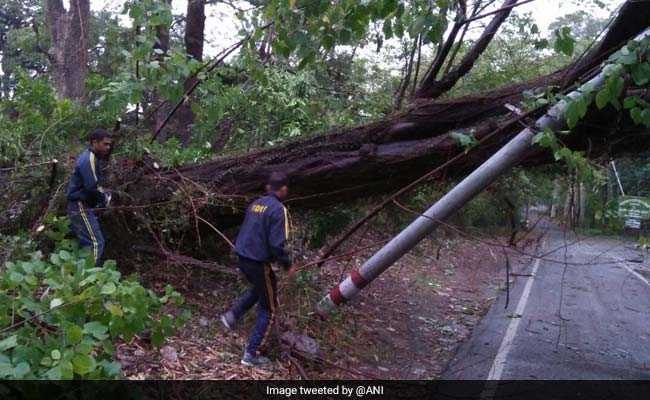 Trees and electricity poles were damaged after heavy rain and dust storm in Dehradun.

New Delhi: Weather conditions in Delhi and Rajasthan have begun to improve, with chances of only scattered rains today. The met department has however issued a weather warning for the next 5 days. Heavy rain is likely in Tamil Nadu and Kerala today. On May 9, Meghalaya, Nagaland ,Manipur and Mizoram may witness a thunderstorm.

Dust storm, with a wind speed of 70 kilometres per hour, had hit the national capital and neighbouring Gurgaon just before midnight on Monday. The dust storm was followed by a squall, bringing down the temperature after a hot day, the weatherman said.

The high-velocity wind swept through Delhi around 11.15 PM, an official at the Safdarjung observatory said.

In Tripura, an elderly woman was killed and over 1,000 houses were damaged following a severe storm, officials from the state emergency operation centre said. The IMD forecast for May 9 says heavy rain is very likely at isolated places in Assam and Meghalaya.

Here are the Highlights on storm and rains in Delhi, weather forecast today:

Strong winds swept parts of Rajasthan overnight and this morning, affecting normal life, weather officials said. No casualties have been reported so far.

May 08, 2018 09:53 (IST)
The Delhi government has ordered all afternoon schools to remain closed todayas precautionary measures.
May 08, 2018 09:41 (IST)
Schools in neighbouring Haryana have been closed till today following storm warnings. The Haryana government has cancelled leave of all municipal officials in view of the met department's forecast. The fire department and other emergency services, too, have been asked to stay on alert.
May 08, 2018 09:26 (IST)
"If the wind speed is reported to be above 90 km per hour, trains will be put on hold at platforms. No train will enter platforms with a speed of more than 15 kilometers per hour," news agency Press Trust of India quoted a metro official as saying.
May 08, 2018 09:24 (IST)
Met office has said that several parts of north India, including Delhi could witness thunderstorm and squall today. Wind speeds could go up to 50-70 kilometers per hour.
May 08, 2018 09:10 (IST)
All the public and private schools in Ghaziabad and many in Noida will remain closed on Tuesday in view of the adverse weather expected, District Magistrate Ritu Maheswari said.
May 08, 2018 08:28 (IST) 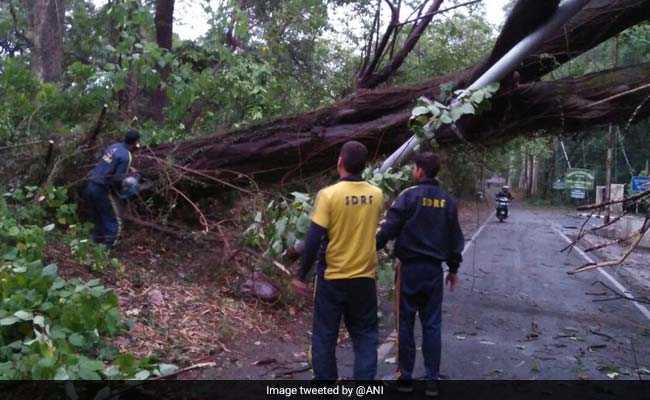 Trees and electricity poles were damaged after heavy rain and dust storm in Dehradun.
May 08, 2018 07:58 (IST)
Khowai, which is at a driving distance of 55 km from Agartala, was worst hit by the thunderstorm. However, parts of Dhalai, Gomati, Unakoti, Sipahijala districts and South Tripura were also affected.
May 08, 2018 07:53 (IST)
Sixteen relief camps were set up across Tripura on Monday. 2,500 people have taken shelter there.
May 08, 2018 07:51 (IST)
A severe storm struck many parts of Tripura on Monday. An elderly woman was killed. 1800 houses have been damaged in the past 48 hours, officials from the state emergency operation centre said.
May 08, 2018 07:36 (IST)
The Delhi Metro has decided to exercise extreme caution in running of trains in wake of the warning.
May 08, 2018 07:23 (IST) 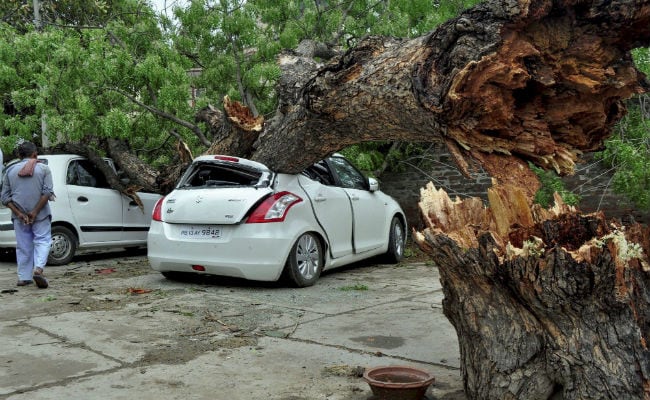