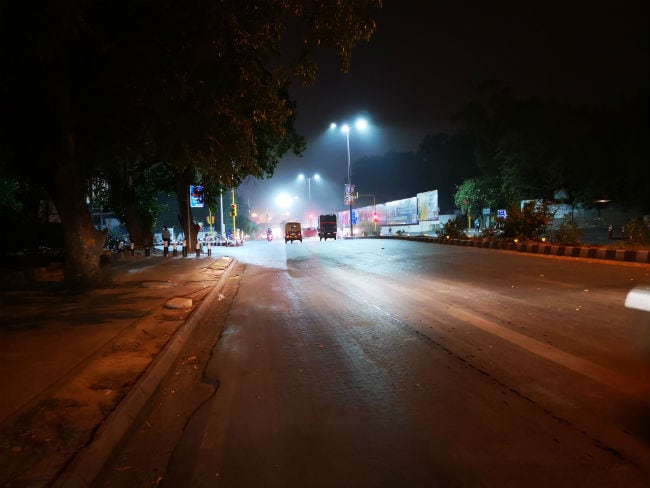 Weather office has predicted strong winds and rain in Delhi

New Delhi: A dust storm, with a wind speed of 70 kilometres per hour, hit the national capital tonight followed by a squall, bringing down the temperature after a hot day, the weatherman said. The high-velocity wind swept through Delhi around 11.15 PM, an official at the Safdarjung observatory said. The MeT department had issued a warning message at 8.53 pm, saying a spell of rain/thunderstorm accompanied with squall is likely to occur over Delhi and NCR during in the next three-four hours. It has forecast rains and gusty winds for today as well. The IMD also issued an amber-coloured alert, indicating severe weather, for parts of Jammu and Kashmir, Uttarkhand, Himachal Pradesh, Haryana, Chandigarh, western Uttar Pradesh, Sikkim and West Bengal. Last week, 124 people died and over 300 were injured in thunderstorms and lightning that hit five states. Nearly 75 people were killed in Uttar Pradesh alone.

Here are highlights on storm and rains in Delhi, weather forecast today:

May 08, 2018 05:38 (IST)
Flights delayed due to dust storm
Six arriving flights, one departure flight delayed due to the dust storm that hit Delhi and surrounding NCR areas.
May 08, 2018 03:16 (IST)
One killed, houses damaged as cyclone hits Tripura
An elderly woman was killed and over 1,800 houses were damaged after a nor'wester struck various parts of Tripura, officials said. Khowai was the worst affected district in the state, they said. Around 2,500 people were forced to take shelter in government buildings when the storm hit the state on Sunday, a state government official said.
May 08, 2018 03:13 (IST)
Ghaziabad schools, colleges closed on Tuesday
All the public and private schools in Ghaziabad will remain closed on Tuesday in view of the adverse weather expected, it was announced on Monday. In an order, District Magistrate Ritu Maheswari said that in view of the forecast for a thunderstorm on Tuesday, private and government schools and colleges shall remained closed.
May 08, 2018 02:42 (IST)
A tree fell in the Delhi Cantt area after a dust storm hit the national capital and adjoining areas.

May 08, 2018 02:37 (IST)
Unseasonal snowfall in higher reaches of Jammu and Kashmir
The high-altitude areas of Chenab valley in Jammu and Kashmir experienced unseasonal snowfall today, engulfing the region in wintry conditions and leaving hundreds of nomadic families, with their livestock, stranded. The snowfall started in the higher reaches of Chenab region, especially in the surroundings of Gandoh and Bhadarwah valley, this morning, officials said. The snowfall followed torrential rains that lashed large parts of Jammu and Kashmir since yesterday, bringing down the mercury by several notches.
May 08, 2018 02:35 (IST)
Two injured in Uttarakhand
Two pilgrims were injured as heavy rains accompanied by high-speed winds lashed Chamoli district of Uttarakhand blowing away rooftops and uprooting trees, reports PTI.
May 08, 2018 02:32 (IST)
Light rain, dust storm likely in parts of Rajasthan
The Met department has issued warnings about dust storm with light rains in several districts of Rajasthan including Alwar, Bundi, Chittorgarh, Dausa, Dholpur and Jaipur. A dust storm occurred at Sriganganagar where winds at the speed of 28 km/hr affected normal life, officials said.
May 08, 2018 02:30 (IST)
Dust storm in Punjab, Haryana
Dust storms hit Chandigarh and parts of Punjab and Haryana this evening with many residents preferring to stay indoors in view of the IMD forecasting thunderstorm and squall tomorrow in several parts of north India. There were reports of power supply getting disrupted at some places in the states.
May 08, 2018 02:27 (IST)
The IMD issued an amber-coloured alert, indicating severe weather, for parts of Jammu and Kashmir, Uttarkhand, Himachal Pradesh, Haryana, Delhi, Chandigarh, western Uttar Pradesh, Sikkim and West Bengal.
May 08, 2018 02:26 (IST)
The Delhi Metro Rail Corporation (DMRC), which operates trains in the national capital and NCR, said it would exercise extreme caution in running of trains. "If wind speed is reported in the range of 70-90 kmph then train movement will remain normal but trains will enter with a restricted speed of 40 kmph or less at the platforms on elevated section. "If wind speed is reported more than 90 kmph then trains will be put on hold at platforms and no train will enter platform with a speed of more than 15 kmph," a senior DMRC official said.
May 08, 2018 02:23 (IST)

Thunderstorm: Delhi Government Issues Advisory, Dos And Don'ts
The Delhi government has issued an advisory ahead of today's expected thunderstorm, listing a set of dos and don'ts.
May 08, 2018 02:19 (IST)
Massive dust storm hits Uttar Pradesh's Meerut. All educational institutions to remain closed today due to thunderstorm alert for the region, reports ANI.

May 08, 2018 02:17 (IST)
Rain in lower hills of Himachal Pradesh, snowfall in higher reaches
Rains lashed mid and lower hills of Himachal Pradesh and the state's higher reaches witnessed snowfall with the Indian Meteorological Department (IMD) issuing a warning of heavy rain and thunderstorm tomorrow in north India. Tribal areas and other higher reaches had moderate snowfall, while mid and lower hills experienced widespread rains causing marginal fall in temperatures.
May 08, 2018 01:57 (IST)
The Haryana government has cancelled leave of all officials in municipalities across the state, in view of the IMD issuing an alert forecasting thunderstorm and squall today in several parts of north India.
May 08, 2018 01:54 (IST)
The India Meteorological Department (IMD) on Monday issued an alert forecasting that several parts of north India including Delhi could witness thunderstorm and squall today with winds gusting up to 50-70 kilometers per hour.
May 08, 2018 01:44 (IST)
The MeT department issued a warning message at 8.53 pm, saying a spell of rain and thunderstorm accompanied with squall is likely to occur over Delhi and NCR during in the next three-four hours. It has forecast rains and gusty winds for today as well.
May 08, 2018 01:42 (IST)
Dust storm, with a wind speed of 70 kilometres per hour, hit the national capital tonight followed by a squall, bringing down the temperature after a hot day. The high-velocity wind swept through Delhi around 11.15 PM, an official at the Safdarjung observatory said.
May 07, 2018 23:22 (IST)
Strong winds and rain hit Delhi, Gurgaon and cities in north India amid storm warning in several states.
May 07, 2018 19:28 (IST)
The Delhi government has put search and rescue teams on standby in every district following the meteorological department's warning about heavy rains and thunderstorm, news agency PTI reported.
May 07, 2018 19:03 (IST)
Afternoon schools to remain closed tomorrow in Delhi over rain and thunderstorm alert, says state government, news agency PTI reported
May 07, 2018 17:18 (IST)
The Delhi government has put search and rescue teams on standby in every district following the meteorological department's warning about heavy rains and thunderstorm, news agency PTI reported.
May 07, 2018 15:57 (IST)
A woman and a child were  killed in separate incidents of house collapse and 15 others injured when high velocity winds swept across the Porsa town in Madhya Pradesh, an official said today. The winds hit Porsa last evening, damaging several houses and uprooting trees, Ambah town's sub-divisional magistrate (SDM) R S Bakna was quoted as saying by news agency PTI.
May 07, 2018 15:11 (IST)
In Himachal Pradesh, mild snowfall occurred on Monday in the mountain areas while some parts received rain.
The local weather office warned of more snow and rain accompanied by hailstorms and gusty winds in the state till Wednesday.
May 07, 2018 14:16 (IST)
The weather office here on Monday warned that thunderstorms, squalls and gusty winds are likely to hit many parts of India, including Delhi, till Friday even as the mountains of Himachal Pradesh received fresh snowfall.
In a weather warning bulletin, the India Meteorological Department (IMD) said the states likely to be affected by thunderstorms and gusty winds are Uttar Pradesh, Bihar, West Bengal, Sikkim, Odisha, Assam, Meghalaya, Nagaland, Manipur, Mizoram, Tripura, Karnataka and Kerala.
Thunderstorms and squalls are "very, very likely at isolated places in Haryana, Chandigarh and Delhi", the weather office said.
May 07, 2018 11:53 (IST)
Agra On 48-Hour Weather Alert Till Wednesday
Met office has issued an 48-hour alert in Agra after strong surface winds followed by hail storm were reported here.
District Magistrate Gaurav Dayal issued a detailed advisory with "Dos and Don'ts", gearing up for another deadly storm as the Met warned of high velocity winds and heavy showers in the region.
May 07, 2018 10:42 (IST)
"The day ahead will be partly cloudy. Light rain with strong surface wind is likely to occur," an IMD official was quoted by IANS.
The maximum temperature was likely to hover around 38 degrees Celsius.
May 07, 2018 10:41 (IST)
Seven persons were injured and about 200 houses were collapsed in a storm in Nadia district on Sunday, District Magistrate Sumit Gupta said.
The storm with a speed of about 90 to 100 km per hour lashed places such as Ranaghat, Hanskhali and Krishnagar.
May 07, 2018 09:38 (IST)
Early morning rains lashed Chandigarh and surrounding areas. The maximum temperatures at most places in Punjab, Haryana and Chandigarh remained between 31.5 to 38.5 degrees Celsius on Sunday with rainfall at some places and overcast sky at several in others.
May 07, 2018 07:52 (IST)
Heavy rain is very likely at isolated places in six northeastern states --- Assam, Meghalaya, Nagaland, Manipur, Mizoram and Tripura today, according to the Indian Meterological Department (IMD).
May 07, 2018 07:51 (IST)
The weather office has issued storm alert in Delhi on Monday along with rain. 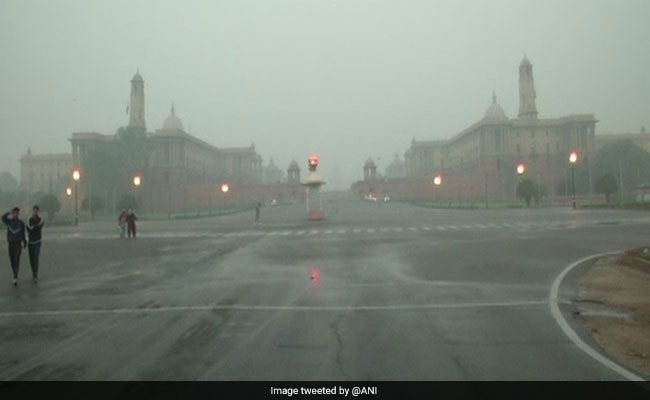 May 07, 2018 07:44 (IST)
Uttar Pradesh Chief Minister Yogi Adityanath cut short his election campaign in Karnataka after nearly 75 people were killed in last week's storm in the state. On Saturday, Mr Adityanath took an aerial survey of Agra and Kanpur.
May 07, 2018 07:43 (IST)
At least 124 people died and over 300 were injured in thunderstorms and lightning that hit five states last week.