The train made its inaugural run from New Jalpaiguri Railway Station in West Bengal. 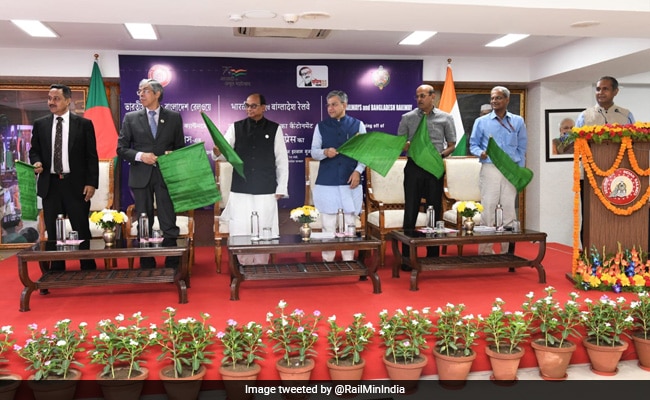 Ashwini Vaishnaw and Md Nurul Islam Sujan flagged off the Mitali Express in a virtual event.

Passenger train connectivity between India and Bangladesh took a step forward with the railway ministers of the two countries virtually flagging off New Jalpaiguri-Dhaka Mitali Express on Wednesday, an official of Northeast Frontier Railway (NFR) said.

The train made its inaugural run from New Jalpaiguri Railway Station in West Bengal.

This train, the Mitali Express, will be yet another milestone in increasing this friendship, in strengthening this bond, in improving this relationship: Hon'ble Minister of Railways Shri @AshwiniVaishnawpic.twitter.com/PxUbHttP9M

The bi-weekly service will run as a day train from New Jalpaiguri starting at 11.45 am IST on Sundays and Wednesdays, while it will be an overnight service from Dhaka commencing journey from there at 9.15 pm Bangladesh Standard Time on Mondays and Thursdays, he said.

The general manager of NFR, Anshul Gupta, who was present at New Jalpaiguri station for the inaugural run of the international service, said that the train connectivity will provide more opportunities for tourism and trade between Bangladesh and northern West Bengal, blessed with several destinations in the Darjeeling Hills and forests and tea gardens in Dooars.

Local MP Jayanta Roy, who attended the programme, said that the service fulfils a long-standing demand of those associated with travel trade.

Passengers travelling on the inaugural service said that the train connectivity will further strengthen cultural and social ties between the people of the two countries, apart from boosting tourism.

The train will cover a distance of 595 km between New Jalpaiguri and Dhaka with 69 km of track length being in India and the rest in the neighbouring country.

Apart from two technical stops at Haldibari, the last station on the route on the Indian side, and at Chilahati, the first station on the Bangladesh side, Mitali Express will have no stoppages in between.