This train would be the third passenger train service, that is scheduled to be flagged off from Rail Bhawan in New Delhi on June 1 by the Railways Ministers of both the countries. 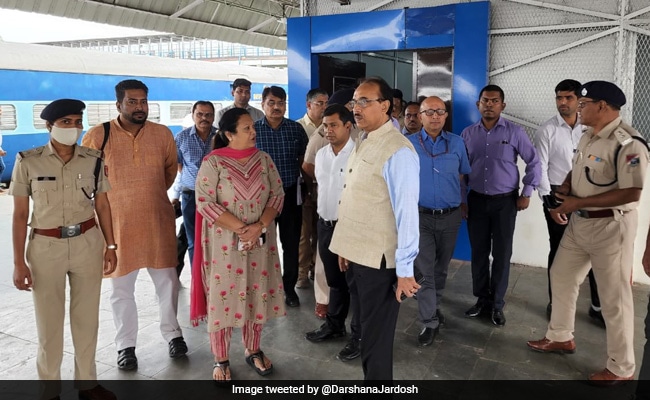 The train will cover the distance of around 513 km

The railway line connecting India and Bangladesh- New Jalpaiguri-Dhaka Cantonment Mitali Express- is all set to run from Wednesday.

This train would be the third passenger train service, that is scheduled to be flagged off from Rail Bhawan in New Delhi on June 1 by the Railways Ministers of both the countries.

The train will cover the distance of around 513km between New Jalpaiguri in West Bengal and Dhaka Cantonment in Bangaldesh in nine hours.

Suvendhu Kumar Chaudhury, DRM, Katihar division of Northeast Frontier Railway said, "we are ready to start the services, the train is ready with maximum facilities. Around 15-20 passengers have already booked their tickets for the first journey."

"It is a direct service, with no pantry-car facility. We have installed a number of CCTV cameras at the platform as well and our Railway Protection Force (RPF) personnel will be deputed in every corner. The Border Security Force (BSF) will take the train at Haldibari station and hand it over to Bangladesh at the Zero line," he added.

A shopkeeper at New Jalpaiguri station, Prem Chand Prasad said, "this will boost up our business and will also create job opportunities."

The tickets for this train are available at the overseas Passenger Reservation System counters at New Jalpaiguri Station and Kolkata Railway Station.

The Bharatiya Janata Party MP from Jalpaiguri Dr Jayanta Roy also called it a great opportunity for the people of North Bengal that the Indian Railway is set to start its first India-Bangladesh train service from New Jalpaiguri station (NJP). "Now people can take their journey from NJP for Bangladesh's Dhaka," he said.

"The new train services will improve the bilateral trade relation and socio-economic activities of India and Bangladesh. The services will further make travel easier for the passengers and will greatly benefit the tourism sector of North Bengal area along with other tourism hotspots across India," the Chief Public Relations Officer of Northeast Frontier Railway Sabyasachi De said on Friday.