"Can't Say How Long J&K Politicians Will Be Detained": Ajit Doval to NDTV

Nearly 400 political leaders, including former Chief Ministers Mehbooba Mufti and Omar Abdullah, were placed under house arrest as part of a security lockdown imposed after the centre withdrew special status to Jammu and Kashmir 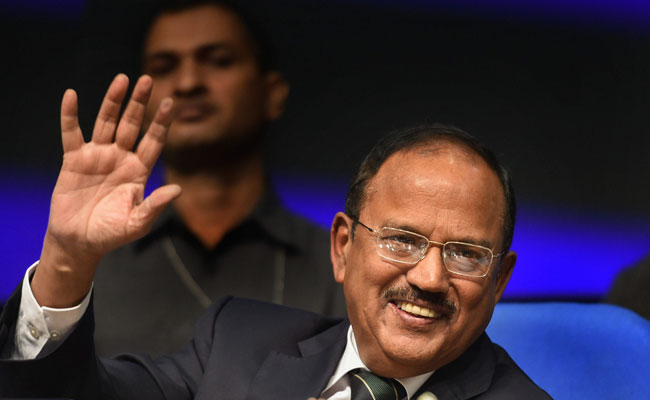 National Security Advisor Ajit Doval told NDTV on Saturday that the government had no specific time plan in place for the release of detained politicians in Jammu and Kashmir, while also stating the centre had sought to ensure "no human right has been violated". Mr Doval added that the safety of people living in the region was a priority,

"Don't have any time period in place as to how long political leaders will be detained. We don't want anyone to get hurt, but things and situation on ground is getting better. We have been very careful about the entire situation. No human right has been violated," Mr Doval claimed.

Nearly 400 political leaders, including former Jammu and Kashmir Chief Ministers Mehbooba Mufti and Omar Abdullah, were either arrested or placed under house arrest as part of a stringent security lockdown imposed after the centre withdrew special status under Article 370 to Jammu and Kashmir

Earlier today Mr Doval told reporters in Delhi that Jammu and Kashmir politicians would remain in "preventive detention" till an "environment is created for democracy to function". He also said the leaders, against whom no criminal charges had been framed, were free to challenge their detentions in a court of law.

"Everything is done according to the framework of law. They can challenge their detention in court. None of them have been charged with criminal offence or sedition, they are in preventive custody till environment is created for democracy to function, which I believe may happen soon," the NSA was quoted in a report by news agency ANI.

National Security Advisor Ajit Doval on detention of political leaders(in J&K): Everything is done according to the framework of law, they can challenge their detention in Court

Last month Ms Mufti's daughter, Sana Iltija Javed, wrote to Home Minister Amit Shah, stating she was worried about her mother's health, having not been able to contact her. She challenged her mother's detention and wrote: "Kashmiris have been caged like animals and deprived of basic human rights."

Earlier this week the Supreme Court ordered that she be allowed to meet her mother.

On Thursday the Supreme Court intervened to order that Left leader Mohammed Tarigami, who had also been placed under house arrest, be shifted to AIIMS in Delhi for medical treatment.

CPI(M) general secretary Sitaram Yechury had twice attempted to visit Mr Tarigami, only to be turned back from Srinagar airport on each occasion.

Congress leader Ghulam Nabi Azad and Trinamool Congress leader Derek O'Brien are also among those who have turned back from visiting Jammu and Kashmir, with the opposition accusing the centre of "muzzling" its voices.

Congress leader Shashi Tharoor said "every Indian democrat" would stand with "mainstream" leaders of the state".

In August the list of people to have been detained grew to include Shah Faesal, an IAS official who quit the service in January to protest the "marginalization of Indian Muslims".

"I don't believe they (political leaders like Ms Mufti) will be released anytime soon," an official with the Jammu and Kashmir administration said on August 28.

The government has maintained that the restrictions and detentions were necessary to maintain law and order. Mr Doval on Saturday claimed the measures had worked.

"I think the situation in Jammu and Kashmir is getting much better than what I anticipated. Only one incident has been reported, on August 6, in which one young boy succumbed; he did not die of bullet injury," he said.

The situation also prompted the international community to voice its worries, with the United States declaring it was "concerned by reports of detentions".

The United Nations said the situation was "deeply concerning".