Pranab Mukherjee On Campus Violence: 'No Room In India For Intolerant Indian' 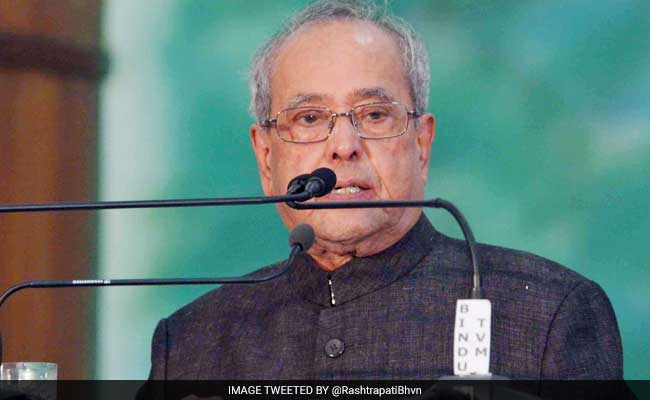 New Delhi/ Kochi: President Pranab Mukherjee on Thursday weighed in on the debate on free speech and nationalism following last week's violence at Ramjas College, saying there is "no room in India for the intolerant Indian". At the same time, he underscored that those in universities "must engage in reasoned discussion and debate rather than propagate a culture of unrest". India, he said, has always been a bastion of "free thought, speech and expression" and freedom of speech is now a key constitutional right.

Pointing out that the nation and the people must come first, he President said, "The time has come for collective efforts to re-discover the sense of national purpose and patriotism".

The speech, titled "India at 70" and delivered at Kerala's Kochi, was a comment on the turbulence in Delhi over student protests following an invite to JNU's Umar Khalid at Ramjas College. With Mr Khalid being accused of sedition last year, the BJP-linked student group ABVP had opposed the invite.

The resulting clashes had injured 20 students and a teacher and renewed the debate on free speech. The Facebook posts of 20-year-old Gurmehar Kaur, opposing the ABVP, her comments the death of her father, a soldier, and the resulting responses from sports and Bollywood icons added fuel to the debate.

Union minister Kiren Rijiju said colleges cannot be allowed to become "hub of anti-national activity". "Freedom of expression in the country does not give anyone the right to make college campuses hub of anti-national activity," he said. Yesterday, Union Minister Arun Jaitley said there was a "conscious attempt" by a section to "make it appear that nationalism is a bad word".

Promoted
Listen to the latest songs, only on JioSaavn.com
Underscoring his message ahead of this year's Republic Day that India has always "celebrated the 'argumentative' Indian, not the 'intolerant' Indian," President Mukherjee said there must be space for "legitimate criticism and dissent".

"Leaders and political activists must listen to people, engage with them, learn from them and respond to their needs and concerns. Our lawmakers should never take the people for granted," he added.