The Amul Girl and Controversies! 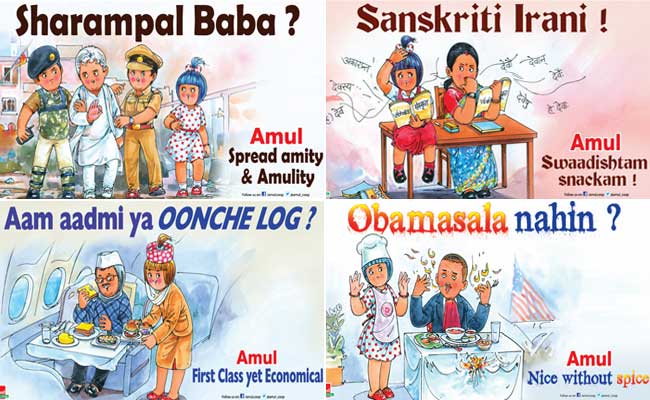 New Delhi: For over 50 years, the Amul girl has been commenting on all things, capturing the spirit of India with beguiling charm but certain spoofs and satirical messages got the campaign's makers into legal wrangles.

"In the 21 years that I've been the campaign custodian, we've poked fun and parodied but never viciously. Our spoofs and satirical messages have been welcomed sportingly by the politicians and popular figures, actors and anarchists," says Rahul DaCunha, whose ad agency creates the Amul outdoor billboards.

But Rahul, said that lampooning occasionally has also led the company to the doorsteps of legal process.

He says legal notices were served to the agency for the ads involving  Jagmohan Dalmiya, Suresh Kalmadi, Satyam Computers and Subrata Roy, but they did not relent.

"Fifty years ago, Verghese Kurien gave my father, Sylvester daCunha, a free hand that he may create these topical without client approval. That permission and trust have been handed down to me. I too have our Amul client's backing and blessings," he said.

Rahul's views find mention in a revised and updated edition of the book "Amul's India", brought out by HarperCollins India.

He is the Managing Director and Creative Head of daCunha Communications.

"Since the first publication of this book in 2012, many news events have impacted us - the coming to power of Prime Minister Narendra Modi, the FIFA fever that gripped the nation, the rise of a younger brigade of stars, newer scams and controversies - and the Amul girl has kept pace with all that and more," says Alpana Parida, president of DY Works which has created the book.

"In this scenario, the second edition of the book had to be more than a mere reprint. It had to be updated with new material. We have brought out some more classics from the archives. We have features on new topics, telling the story of an evolving India as seen from the Amul moppet's eyes," Alpana says.

The new edition has takes on the Amul campaign by the likes of Amitabh Bachchan, Shyam Benegal, Shobhaa De, Rahul Dravid, Sania Mirza and Harsha Bhogle among others.