The shrine, an initiative of Revenue Minister RB Udhayakumar, is located on a 12-acre site at T Kunnathur in Madurai District. 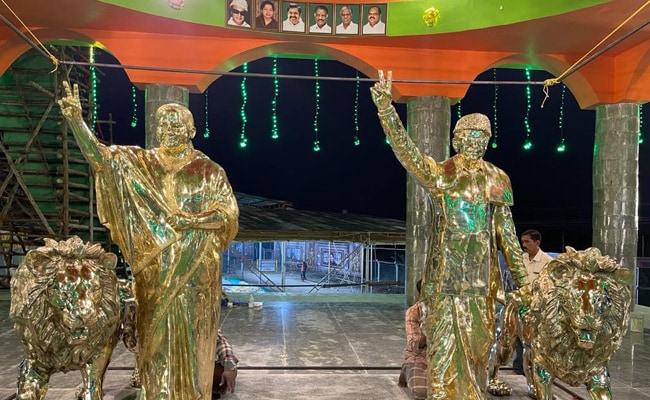 The statues of both J Jayalalithaa and MGR feature a lion

In a grand function, the temple, a large multi-pillared hall with life size bronze statues of MGR and Jayalalithaa was inaugurated by Mr Palaniswami and Mr Panneerselvam, who also performed an "arti".

Amid chant of hymns, priests poured holy water on the finial - which bears similarities to a pot - on the dome like structure over the roof.

The shrine, an initiative of Revenue Minister RB Udhayakumar, who is also the AIADMK wing "Amma Peravai's" secretary, is located on a 12-acre site at T Kunnathur in Madurai District.

The statues of both J Jayalalithaa and MGR feature a lion and the shrine has now been thrown open to the public.

A large number of party workers gathered for the event and in their address, the chief minister and his deputy hailed the two late leaders and recalled the welfare measures initiated during their tenures as chief ministers.

Mr Palaniswami appealed to cadres to work cohesively and win the Assembly elections due in a few months to continue "Amma's" government.

He recalled the opening of a phoneix-themed memorial at the Marina beach in Chennai, which is also Jayalalithaa's mausoleum, and declaring her residence in Chennai a memorial.

Mr Panneerselvam, recalling that DMK chief MK Stalin had recently held a spear like weapon of Lord Muruga in his hand, said such tactics will not help him capture power in Tamil Nadu.

During the run up to elections, "some" will practice deceit to mislead people that they revered divinity, the Deputy Chief Minister said, adding the AIADMK alone had the blessings of both the people and the Almighty.

"We Had To Run To Catch Up": Airtel's Sunil Mittal Praises Mukesh Ambani