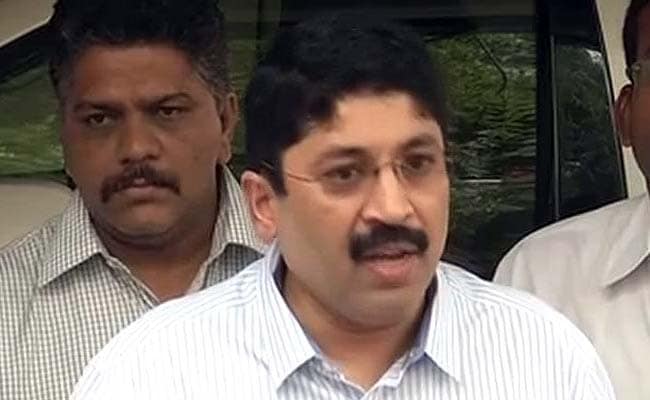 Madras High Court had on August 10 cancelled Dayanidhi Maran's interim anticipatory bail and directed him to surrender before CBI in three days.

This comes after the Supreme Court had rejected the demand of CBI to take Mr Maran into custody while directing the former minister to appear before the agency from 11 am to 5 pm for six days for answering its queries.

Mr Maran reached the agency headquarters in the morning where his examination is underway, CBI sources said.

CBI has registered an FIR against Mr Maran and others alleging that over 300 high-speed telephone lines were provided at his residence here and extended to his brother Kalanithi Maran's SUN TV channel to enable its uplinking when Mr Dayanidhi Maran was Telecom Minister from 2004-07.

The then Chief General Manager of BSNL has claimed that the telephone exchange was set up on the oral order of the then minister, Attorney General Mukul Rohatgi told the Supreme Court.

Madras High Court had on August 10 cancelled Mr Maran's interim anticipatory bail and directed him to surrender before CBI in three days, holding that "prima facie" Maran had "misused" his office by obtaining phone connections illegally and the charges against him were backed by material.

It was challenged before the apex court by Mr Maran where CBI had claimed his custodial interrogation by the probe agency which said it needed his custody to unravel the "actual conspiracy" as the telephone lines were allegedly used by his family-run Sun TV.

"We will not grant you (CBI) his custody. Interim order (of protection against arrest) to continue. In the meantime, we direct the petitioner to appear before CBI...," the apex court said, admitting the plea of Mr Maran for final hearing.

It asked Attorney General Mukul Rohatgi, appearing for CBI, to prepare a questionnaire and give them to CBI personnel and the accused and further granted liberty to the agency to move before it if Mr Maran does not cooperate and answer the queries.
Comments
Dayanidhi MaranTelephone exchange caseSupreme CourtCBITelecom MinisterKalanithi Maran