Telangana: Last week in parliament, Jaya Bachchan led a chorus of angry and impassioned voices amid nationwide shock over the horrific rape and murder of the young veterinarian in Telangana 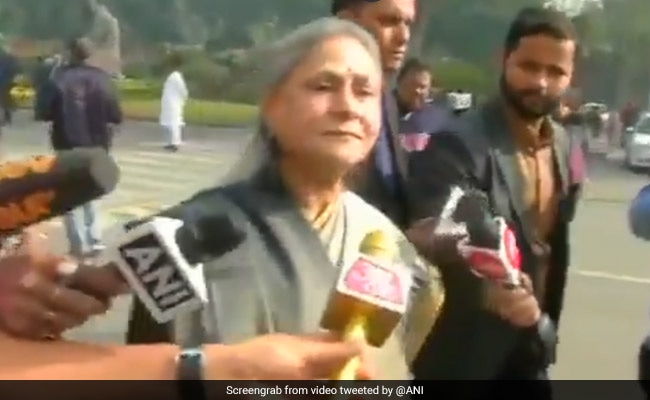 Samajwadi Party MP Jaya Bachchan, who last week in parliament called for public lynching of rapists, today indicated she supports the killing of four rape and murder accused by the Telangana Police.

Four men who allegedly raped, murdered and set on fire a 26-year-old veterinarian in Telangana were shot dead at 3 am today after they tried to run away, according to the police. The accused were brought to the same site where they committed the crime to reconstruct the sequence of events as part of the investigation.

Jaya Bachchan was asked by reporters for a comment as she was walking outside parliament. "Der aaye durust aaye (better late than never)," Ms Bachchan said.

The four men, Mohammed Arif (26), Jollu Shiva (20), Jollu Naveen (20) and Chintakunta Chennakeshavulu (20), tried to snatch weapons from the policemen and escape, the police said, adding they fired in self-defence.

Last week in parliament, Ms Bachchan led a chorus of angry and impassioned voices amid nationwide shock over the horrific rape and murder of the young veterinarian in Telangana.

"These types of people (the rape accused in the Telangana case) need to be brought out in public and lynched," Ms Bachchan said, adding, "I think it is time... the people want the government to give a proper and definite answer".

"I don't know how many times I've stood and spoken after this kind of crime. I think it is time... whether Nirbhaya or Kathua or what happened in Telangana... I think the people now want the government to give a proper and definite answer," Jaya Bachchan told the Rajya Sabha.

"What has the government done? How have they tackled it? How has justice been done for the victims? I am not taking names... but shouldn't the security be held responsible? I feel only one day earlier something similar happened in that area in Telangana... why wasn't this stopped?" she continued.

Mrs Bachchan also demanded that the people who had failed to protect women and children from such horrific assaults should be "named and shamed".