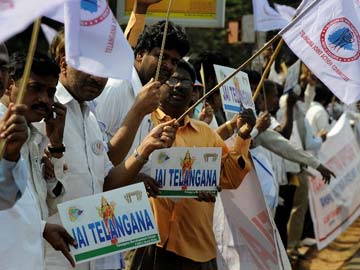 New Delhi: With only five days left of the last Parliament session before national elections due by May, a desperate government is now reportedly working out how to push the controversial Telangana Bill through the Lok Sabha on Tuesday, without a discussion if it has to. (10 latest developments)

It will be a tricky manoeuvre because the main opposition BJP, whose backing the Congress-led Centre needs to pass the bill, has made clear that it must not try to pass the Telangana Bill in chaos and without the presence of all stakeholders in the House. "One section of Andhra Pradesh can't be missing," said senior BJP leader Arun Jaitley, demanding that 16 MPs suspended for protests against Telangana, including those from the Congress, be allowed in during a discussion on the new state.

Sources said hectic talks now on are expected to bring the two major parties to an understanding where the bill can be passed with some semblance of a discussion in the house. The government might reportedly agree to moving official amendments to ensure that some of the BJP's demands on addressing key concerns of Seemandhra - the non-Telangana region of Andhra Pradesh that is strongly opposed to bifurcation - like sharing revenue from the joint capital of Hyderabad, are met.

Seemandhra is worried about a smaller share of water, power and revenue from Telangana once the new state is created. Leaders from the region have vowed to stall the bill at all costs. One of them is the state's chief minister Kiran Kumar Reddy, who, sources say is likely to resign on Tuesday to protest against the bifurcation. Eight of his key officials have reportedly been transferred.

The 16 MPs from across parties were suspended last week after unprecedented violence in Parliament - Congress MP Lagadapati Rajagopal used pepper spray on lawmakers in the Lok Sabha and other MPs yanked mics and broke a computer. Apart from Thursday's shameful vandalism, these lawmakers held the entire session to ransom, not allowing any work in Parliament. (Read: MPs shame India, vandalise Parliament)

Promoted
Listen to the latest songs, only on JioSaavn.com
YSR Congress leader Jagan Mohan Reddy, an MP, on Monday staged a dharna in Delhi and courted arrest to demand the cancellation of the Telangana plan - which the Congress hopes will bring rich electoral dividends from Telangana region in the national elections.

Congress leaders in Seemandhra, including Chief Minister Kiran Kumar Reddy, however fear that the move will decimate the party in the residuary state.