Sources said that Tejashwi Yadav discussed the post poll scenario as well as his brother Tej Pratap related family issues with his father. 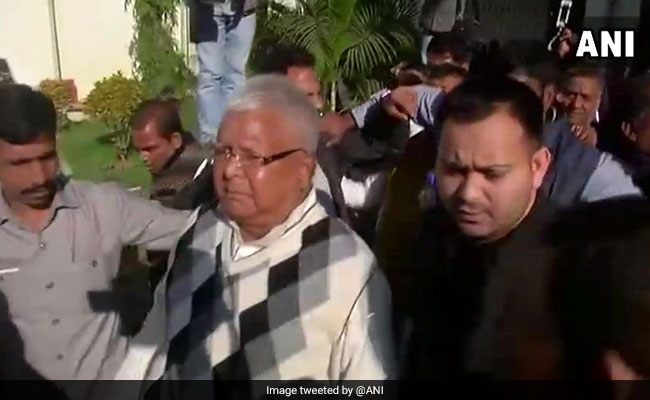 It was their first meeting after the defeat of Rashtriya Janata Dal in Lok Sabha polls. (File photo)

Tejashwi Yadav on Saturday met RJD Chief and his father Lalu Prasad for the first time after his defeat in the Lok Sabha polls. The meeting happened in the payee ward of RIMS hospital.

Tejashwi Yadav went directly from the airport to meet Lalu who is admitted in the Rajendra Institute of Medical Sciences (RIMS). It was their first meeting after the defeat of the RJD in the Lok Sabha polls. The RJD failed to open its account in both Bihar and Jharkhand in these polls.

Sources said that Tejashwi discussed the post poll scenario as well as his brother Tej Pratap related family issues with his father.

Besides Tejashwi, senior RJD leader Raghuvansh Prasad Singh also met Lalu Prasad. After the meeting Raghuvansh Prasad Singh said, "Lalu's medical condition is improving. Blood pressure is normal. We will continue to fight the legal battle. He will come out on bail. He wants us to fight the BJP and take up the issue of bad governance in Bihar. We have been asked to make the party stronger in Bihar."

He said "we will fight the upcoming assembly poll in Jharkhand in a grand alliance of the opposition parties".

Another RJD leader Bhola Yadav said "the jail manual is not being followed in case of Lalu Prasad. As per the manual five persons can meet a convicted person. There is no rule to prevent family members and friends in meeting with the convict. But problems are being created for us".

(Except for the headline, this story has not been edited by NDTV staff and is published from a syndicated feed.)
Comments
tejashwi yadavLalu YadavRashtriya Janata Dal (RJD)

India Offers US Dairy, Chicken Access In Bid For Deal With Trump: Report