Video: Tejashwi Yadav Found Dirt On Gandhi's Statue In London. He Did This

"His thinking shows his faith in Mahatma Gandhi and Gandhian thought," says RJD legislator in tweet 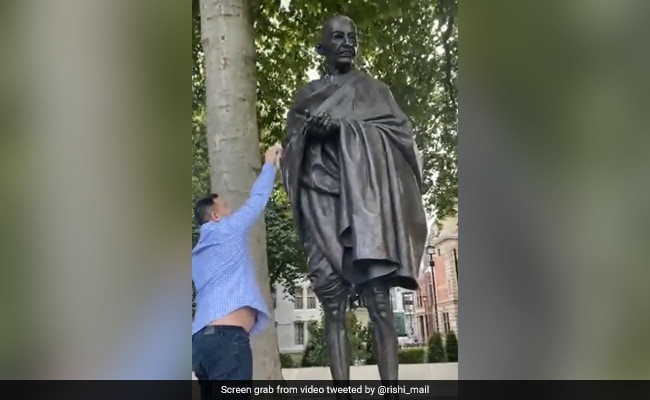 Bihar Deputy Chief Minister Tejashwi Yadav cleaned a statue of Mahatma Gandhi with his handkerchief  near the British Parliament at Westminster in London last month, said a legislator from his party RJD while sharing a video on Twitter.

"When Tejashwi Yadav ji went to pay homage at the historic bronze statue of the Father of the Nation... he found the statue dirty. Seeing this, he could not stop himself and started cleaning it with his handkerchief," said Rishi Kumar, MLA from Obra segment in Aurangabad district.

"His thinking shows his faith in Mahatma Gandhi and Gandhian thought," added the MLA, in his tweets in Hindi.

Tejashwi Yadav recently returned as Deputy Chief Minister as Chief Minister Nitish Kumar dumped the BJP to revive an alliance with the RJD and Congress.

While many in the replies praised the act, there were others who called it a "publicity stunt", saying that there was not much dirt on the statue anyway. "Get your priorities right. See how dirty Patna is," commented a Twitter user in response to the MLA's post.

The nine-foot statue is based on a 1931 photograph of Mahatma Gandhi during his visit to the office of the then UK PM Ramsay MacDonald.

The statue had been vandalised two years ago — "racist" was painted on it — during the 'Black Lives Matter' protests over some of Gandhi's views, mainly during his stay in South Africa. It was unveiled in 2015 by India's then Finance Minister Arun Jaitley — marking the centenary of Gandhi's return to India from South Africa and the start of his struggle for Indian independence.

One of several leaders' statues put up in the area, this one was announced in 2014 by the then Chancellor of the UK Exchequer, George Osborne, on a visit to India as "a fitting tribute to his memory... and a permanent monument to our friendship".

Sculptor Philip Jackson made it after public donations were gathered by a trust set up by prominent Indians in the UK.