Tejashwi Yadav Disapproves Of Posters Depicting Him As Lord Rama

Former Deputy Chief Minister Tejashwi Yadav, however, urged Nitish Kumar to introspect as to why "there is so much public anger against him and which are the promises he did not keep". 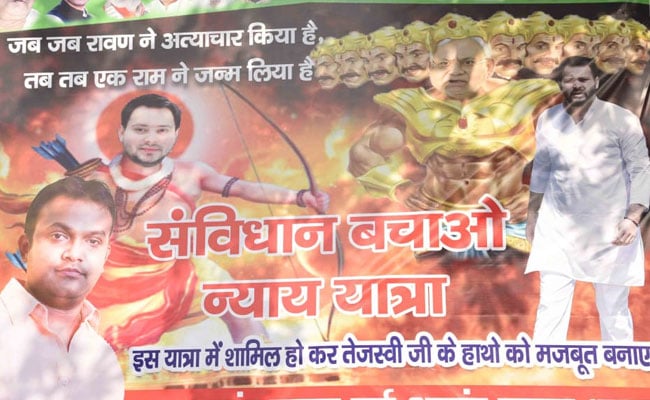 The poster depicting Tejashwi Yadav as Lord Rama, was put up outside his residence

RJD leader Tejashwi Yadav Thursday disapproved of the posters put up outside his residence and the party office a day ago, depicting him as Lord Ram and Bihar Chief Minister Nitish Kumar as demon king Ravana.

Former Deputy Chief Minister Yadav, however, urged the chief minister to introspect as to why "there is so much public anger against him and which are the promises he did not keep".

The RJD's heir apparent in a tweet about the posters put up by a junior party functionary, said that he did not endorse this.

"But Nitish too should spare a thought as to why the people are so angry with him. He must pay heed to his 'inner voice' and introspect as to which are the promises he has not kept. He must ponder over the public outrage," said Mr Yadav, the leader of the Opposition in the state assembly.

Mr Yadav's "inner voice" remark was an apparent dig at the chief minister's stance of resigning last year after corruption cases had surfaced against the RJD leader, triggering demands of his removal.

Mr Kumar had then said he was putting in his papers in accordance with his "inner voice" but formed a new government within less than 24 hours after forging an alliance with the BJP which was in the opposition till then.

The RJD has been vehemently criticising Mr Kumar ever since, accusing him of negating the 2015 assembly polls mandate, which the Grand Alliance of RJD and JD(U) had won handsomely.

An RJD spokesman had said Wednesday that the posters were not put up as per directions of any senior leader but by "over enthusiastic workers" who were enraged over the betrayal of mandate by Mr Kumar last year.

He had also insisted that depiction of Mr Kumar as ten-headed Ravana was not a personal attack on him but was to criticise his government which, he said, has failed on all fronts.

A controversy erupted in Patna on Wednesday over the posters put up by an RJD leader.

Besides attracting criticism from the ruling JD(U), which Mr Kumar heads, the posters were also disapproved of by the RJD ally Congress.

(This story has not been edited by NDTV staff and is auto-generated from a syndicated feed.)
Comments
Tejashwi YadavNitish KumarBihar RJD