Members of the BJP's youth wing had taken out a march to protest against the increase in electricity rates in Kolkata. 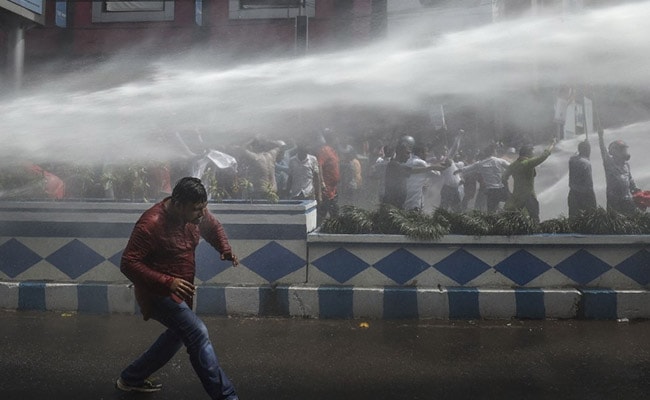 The BJP has alleged that the police action against its workers was "unprovoked".

Clashes erupted in Kolkata today as hundreds of BJP youth activists took out a march in the city's Central Avenue area to protest against a hike in electricity rates, sparking police retaliation. The incident occurred at a time when the BJP is flexing its muscles against the ruling Trinamool Congress following unprecedented gains in the Lok Sabha elections earlier this year.

As party leaders Sayantan Basu, Raju Banerjee and Locket Chatterjee led hundreds of BJP Yuva Morcha workers on the march from the party office in central Kolkata to the headquarters of the Calcutta Electric Supply Corporation (CESC) at Victoria House, police responded by barricading the road ahead of their destination and holding them back with tear gas shells and water cannons.

The BJP listed Mr Basu, Mr Banerjee and BJP Yuva Morcha state president Debjit Sarkar among those arrested. It also claimed that around 85 party activists were hospitalised with injuries suffered in the "unprovoked" police action.

According to PTI, BJP president Amit Shah and state party unit president Dilip Ghosh have been informed about the incident. Amit Shah has reportedly sought further details on the police action from the state party leadership.

Police claim that six of their personnel were injured in the clashes.

The BJP, which is the main opposition party in West Bengal, has often accused the Mamata Banerjee government of unleashing the police on its workers for political reasons. In June, party members had clashed with the police during a protest march taken up from Wellington Square in central Kolkata to Lalbazaar, where the city's police headquarters is located.

The BJP managed to win 18 seats across West Bengal in the recent Lok Sabha elections, just four shy of the Trinamool Congress' count of 22. Dilip Ghosh has claimed that his party will win at least 200 of Bengal's 284 assembly seats in the 2021 state elections.