MK Stalin, who recently led his party to a big win in the assembly polls in his state, is on a visit to the national capital. 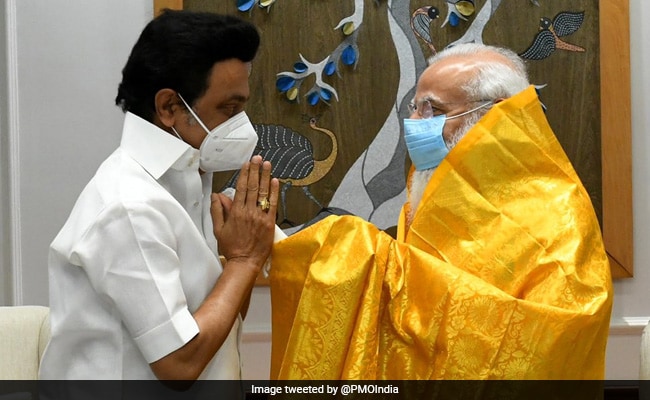 On his maiden visit to the national capital after assuming office as Chief Minister last month, MK Stalin urged PM Modi to grant citizenship to Tamil refugees from Sri Lanka, withdraw the Citizenship Amendment Act and the three farm laws.

Raising the level of Mullaperiyar dam, priority for river-linking initiatives, scrapping NEET, finding a permanent solution to the travails of fishermen at the hands of Sri Lankan Navy, completing work for AIIMS at Madurai in Tamil Nadu were among the other issues he raised.

While one facility is at Chengelpet near Chennai, another is in the Nilgiris district.

"I have given a memorandum to the Prime Minister," he told reporters after his 30-minute meeting with PM Modi which he described as satisfactory. Asked about the release of seven Rajiv Gandhi case
convicts, he said the state government's recommendation on their release was with the Centre now (forwarded by Governor Banwarilal Purohit to President Ram Nath Kovind).

Also, a related matter was in court and the government would formulate its stance in accordance with the legal proceedings, he added.

For long, most Tamil Nadu parties, including the DMK and AIADMK, have favoured the release of Rajiv case convicts as they had spent about three decades in prison and recently Perarivalan, one of the convicts, was granted leave for a month.

MK Stalin said the union government should release full funding due to Tamil Nadu including those related to Goods and Service Tax and these were among the demands that were made in the memorandum.

All entrance examinations for professional courses like the National Eligibility-cum-Entrance Test for medicine should be scrapped and such aspects also featured in the memorandum, he said, reiterating the state's demand.

He said the Prime Minister has assured his full cooperation to take forward the development initiatives of Tamil Nadu.

MK Stalin said he would continue to exert pressure on the Centre to fulfill the demands which also included retrieving Katchatheevu from Sri Lanka, as a lasting solution to the fishermen issue.

"We will extend our hand (of support) for (harmonious) ties with the Centre and at the same time raise our voice for state's rights," he replied when asked if he would pursue a line like that of West Bengal Chief Minister Mamata Banerjee vis-a-vis ties with Centre or like others who follow a cordial approach.

Though he should have met the Prime Minister immediately after becoming chief minister, the pandemic had deferred the meeting. "Now the Coronavirus cases in Tamil Nadu and other parts of India have declined considerably," he said and indicated the downward graph had paved the way for the crucial meeting today.

"We will implement them all, gradually," he replied when asked if he would implement his party's poll assurances, including winding up state-owned TASMAC liquor outlets across Tamil Nadu.

On the Sri Lankan Tamils issue, he had sought the Centre's intervention to ensure the "Eelam Tamils equal civil and political rights."

The 25-point memorandum, which he presented to PM Modi, highlighted several demands of the state which also included expediting the AIIMS project at Madurai and establishing a new AIIMS in Coimbatore.