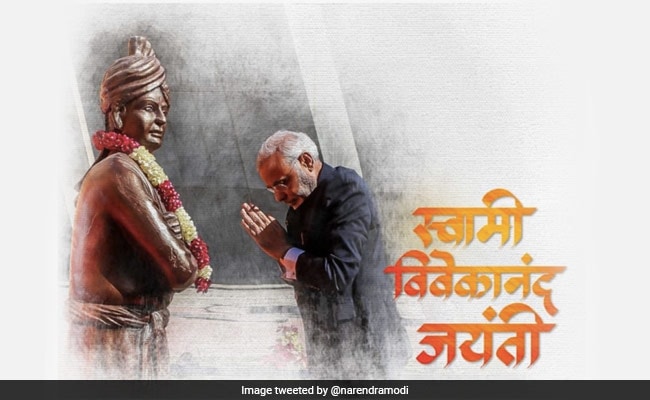 On National Youth Day, PM Modi  invited the youth to share their thoughts. "This Vivekananda Jayanti, there's a creative effort on the NaMo App that lets you share his thoughts and a personalized message...".

This Vivekananda Jayanti, there's a creative effort on the NaMo App that lets you share his thoughts and a personalised message.
Let us spread Swami Vivekananda's dynamic thoughts and ideals far and wide! https://t.co/lMjQwqH0M2pic.twitter.com/Nh4ZVtn3k7

The PM also said, "Let us spread Swami Vivekananda's dynamic thoughts and ideals far and wide! Inspired by the great ideals of Swami Vivekananda and his vision for youth empowerment, the National Youth Parliament Festival gives a platform to India's youth to showcase their skills. It also furthers the spirit of 'Ek Bharat, Shreshtha Bharat' among youngsters.

On Swami Vivekanand's Jayanti, President Ram Nath Kovind and Vice President M Venkaiah Naidu paid their respect to the great spiritual leader and youth icon. "My humble tributes to Swami Vivekananda on his birth anniversary. An inspiration for entire humanity, for the youth  in particular, he revitalized India's spiritual heritage...His teachings continue to inspire all of us," President Kovind wrote on Twitter.

"I bow my head in reverence to one of the greatest spiritual leaders of our country in recent centuries...Swami Ji was an intellectual of extraordinary calibre, an exceptional orator and a true nationalist," the Vice President said.