Sushma Swaraj Not In PM Modi's Cabinet, Sits In Audience At Oath

Sushma Swaraj was one of the most popular ministers on social media and was acknowledged for her quick response to SOS and calls for assistance on Twitter. 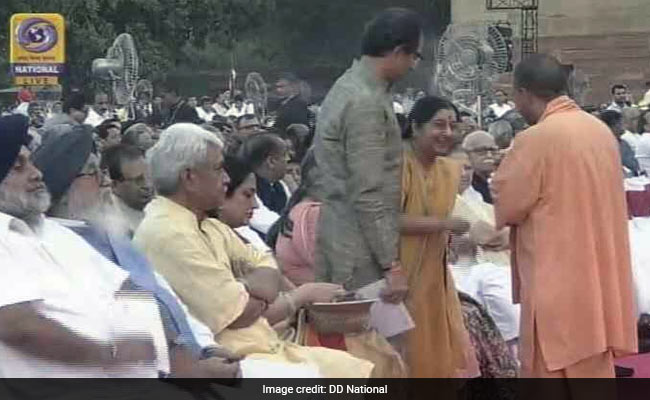 Sushma Swaraj, a nine-time parliamentarian, did not contest the election citing health reasons.

Sushma Swaraj, who was External Affairs minister in the previous government, was seen taking a seat in the audience at Prime Minister Narendra Modi's oath ceremony today, an indication that the veteran leader will sit out of a BJP government for the first time.

The 67-year-old was one of the most popular ministers on social media and was acknowledged for her quick response to SOS and calls for assistance on Twitter. Even banal or joking requests drew a response from Sushma Swaraj.

Since morning, Sushma Swaraj was being talked about as one of the top ministers in the new government.

Her absence at a tea at PM Modi's home for new ministers was to many a sign that she may not be in the new government.

Thanking PM Modi, Ms Swaraj tweeted after the swearing-in ceremony that she prays for the government to run successfully. "Dear Prime Minister, you gave me the opportunity to serve the people of the country in India and abroad, and also accorded respect during my tenure. I am thankful to you for that. I pray to God that our government runs successfully," she tweeted.

Sushma Swaraj, a nine-time parliamentarian, did not contest the election citing health reasons.

She was the Lok Sabha MP from Vidisha. There was speculation that the party would not want to lose one of its best orators in parliament and may bring her back through the Rajya Sabha.

Ms Swaraj, who was also minister in the previous Atal Bihari Vajpayee-led BJP government in the 1990s, is known for her gift of repartee.

She was considered an important factor in PM Modi's mission to build brand India in the world. She was also reported to be the one to advise the Prime Minister for his events and speeches abroad.

Ms Swaraj was admired most for her help to those who wrote to her on problems related to Visa and passports.

The veteran was forced to take a break from work for months in 2016 because of a diabetes condition. She had a kidney transplant, for which she had to be away for three months.