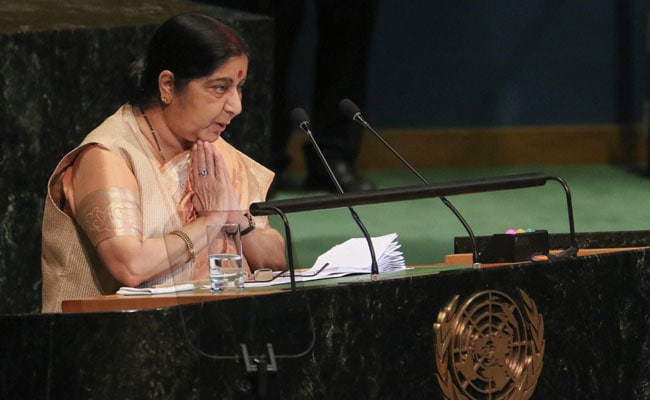 India on Saturday lambasted the lack of progress at the UN for adopting a global convention on international terrorism, saying it is because of such inactions that terrorists with a bounty on their head are celebrated and glorified with postage stamps.

India last week called off a meeting between External Affairs Minister Sushma Swaraj and her Pakistani counterpart Shah Mehmood Qureshi at the UN citing the release of postal stamps "glorifying" Kashmiri terrorist Burhan Wani by Pakistan as one of the reasons.

"Each year, for last five years, India has been arguing from this podium that lists are not enough to check terrorists and their protectors. We need to bring them to accountability through international law," Ms Swaraj said in her address to the General Debate of the 73rd session of the UN General Assembly.

She said that India had proposed a draft document in 1996 on the Comprehensive Convention on International Terrorism (CCIT) at the UN but even till today, that draft has remained a draft, because UN member states cannot agree on a common language.

"On the one hand, we want to fight terrorism; on the other, we cannot define it.

"This is why terrorists with a price on their head are celebrated, financed and armed as liberation heroes by a country that remains a member of the United Nations," Ms Swaraj said

She was referring to Mumbai terror attack mastermind Hafiz Saeed on whom the US has put a USD 10 million bounty for information leading to his arrest and conviction.

Despite the bounty and UN sanctions against him, Saeed moves around with impunity in Pakistan, addresses rallies and takes part in the 2018 general elections, she said.

Ms Swaraj further pointed out that in the absence of an international law on counter-terrorism, "cruelty and barbarism are advertised as heroism".

"The country prints postage stamps glorifying terrorists. If we do not act now, we will have to deal with conflagration later," Ms Swaraj said, referring to Pakistan releasing a series of 'commemorative' postal stamps glorifying Hizbul Mujahideen terrorist Burhan Wani as a "freedom fighter".

Wani was gunned down in an encounter with Indian security forces in July 2016.

Ms Swaraj made a strong appeal to the 193-member UN body that it come to an agreement soon on the CCIT as one of the necessary measures in a long running war.