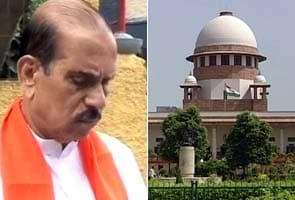 New Delhi: The Supreme Court has slammed Shiv Sena leader and former Maharashtra Chief Minister Manohar Joshi for handing over prime government land in Pune to his son-in-law for building a housing complex in 1998.

In a severe indictment of Mr Joshi - also a former Lok Sabha Speaker - the court observed, "It is rather unfortunate that the then chief minister, who claims to be an educationist, took interest in releasing a plot duly reserved and acquired for a primary school only for the benefit of his son-in-law."

The case, dating back to 1998, pertains to the change of land use of a plot meant for a primary school in Pune to favour a builder who was close to Mr Joshi's son-in-law Girish Vyas. The nod for the change in the land use was given by Mr Joshi himself.

Promoted
Listen to the latest songs, only on JioSaavn.com
The court has imposed a fine of Rs 15,000 on Mr Joshi and has asked his son-in-law, Mr Vyas, to surrender his claim on the ten-storied building that has come up on that land, failing which the structure would be demolished.