Sumitra Mahajan was speaking at an event chaired by Madhya Pradesh Governor Lalji Tandon in Indore on Sunday. 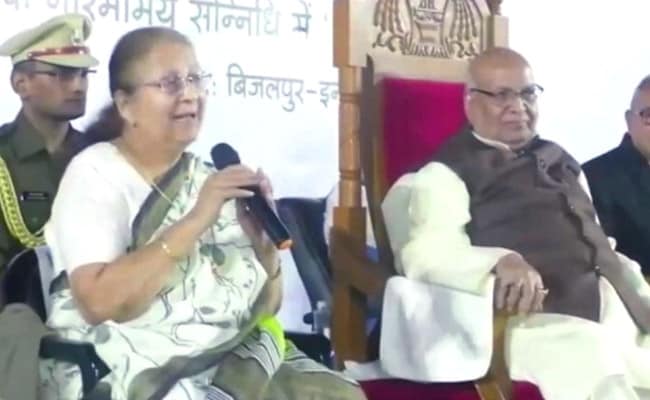 Former Lok Sabha speaker and BJP leader Sumitra Mahajan on Monday said that she used to request Congress leaders to raise issues when former Madhya Pradesh chief minister Shivraj Singh Chouhan-led BJP government was in power in the state. Ms Mahajan said that she could not speak up against Mr Chouhan as she was a part of the BJP which ruled Madhya Pradesh till last year.

"If my government was in power, I could not speak against them but I felt that issues needed to be raised for the welfare of people of Indore. I used to humbly request [Congress leaders] Jitu Patwari and Tulsi Silawat to raise the issue, while also assuring that the situation will be handled and taken to Shivraj [Singh Chouhan]," she was quoted as saying by news agency ANI.

Ms Mahajan was speaking at an event chaired by Madhya Pradesh Governor Lalji Tandon in Indore on Sunday.

She said that the step was taken keeping in mind the development of Indore. "When our agenda is to develop Indore, we do not keep party politics in mind," the former Speaker said.

Shivraj Singh Chouhan served as Madhya Pradesh chief minister between 2005 and 2018. In December last year, after failing to get a majority in state assembly elections, he resigned from the post and was replaced by a Congress government led by Kamal Nath.

Sumitra Mahajan, who was speaker of the 16th Lok Sabha from 2014 to 2019, had announced earlier this year that she would not contest the 2019 general elections.