In his address at Paris Peace Forum he called for coordinated action by nations, bilaterally or multilaterally, to prevent the forces of terrorism and extremism from building presence in the digital domain. 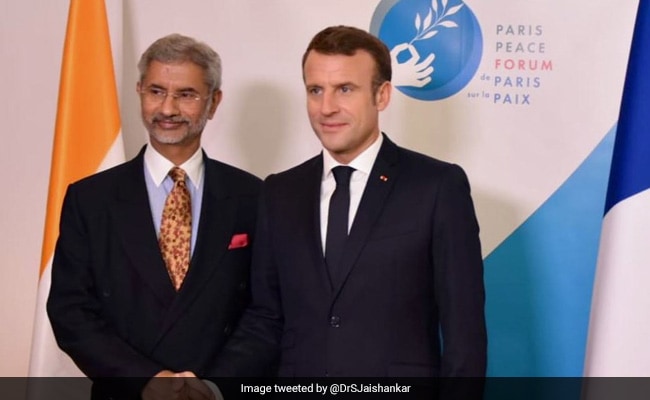 The two leaders met at the Paris Peace Forum on Tuesday. S Jaishankar also tweeted after the meeting.

India's willingness to work with like-minded to ensure that digital space advances societies without endangering security. Must prevent terrorism and extremism from building a dominant digital presence.https://t.co/E53L9ytfUPpic.twitter.com/F3MtLmhvic

The Indian Air Force last month received its first Rafale fighter jet from a series of 36 aircraft purchased from France.

Mr Jaishankar, during his address at the Paris Peace Forum, called for coordinated action by nations, bilaterally or multilaterally, to prevent the forces of terrorism and extremism from building presence in the digital domain.

On issues related to the governance of cyberspace, Mr Jaishankar said to address the specific security threats, including cyber attacks on critical infrastructures, countries should consider entering into arrangements for speedy action and mitigation.

He said India's support to the Christchurch call to eliminate terrorist and violent extremist content online manifests the country's commitment to work with "like-minded countries to ensure that the entire digital space serves to advance our societies and economies, without endangering our safety and security".

The Christchurch Call- named after the New Zealand city in which 51 people from the Muslim community were killed in terrorist attacks broadcast live on the Internet on March 15, 2019 - is an action plan that commits governments, international organizations and internet players to take a series of measures, in particular developing tools to prevent the downloading of terrorist and violent extremist content.

India has joined France, New Zealand, Canada and several other countries in launching a major initiative to combat terrorism and extremism online and secure the internet.

Mr Jaishankar said there is a need to arrive at a global understanding if not a global regulation, to ensure that the cyberspace remains open, safe and secure. For this, he said, multilateralism is more essential than ever before.

He said cyberspace and digital technologies have been a real force of economic, social, political, industrial, even behavioral transformation.

"It operates in national boundaries but has a borderless nature. It offers limitless opportunities but also exposes us to an uncharted territory of considerable challenges," S Jaishankar said.

"Now, for a large developing country like India, digital domain and its technologies drive our democracy and development programmes; are central to effective and extended governance; and power our knowledge and innovation economy," he said.

He said the world's largest 1.2 billion strong biometrics based digital Unique ID programme; 1.2 billion mobile phone connections; 1 billion bank accounts; and over 500 million internet connections has created a massive matrix that converges growth with governance and mainstreams all the demographies into national development.

"We are excited about the opportunities, but also concerned about the threats from the cyberspace," he said.

There are actors, both state and non state, whose actions present a clear threat national, regional and global security, he further said.

"One example is unimpeded growth of terrorism related activities, including extremist propaganda; terror financing; illicit trafficking and radicalization in the cyberspace," he added.

He said states must protect the data privacy and ensure data security for its citizens while maintaining their openness at the same time.

"Coordinated action by nations (bilaterally or multilaterally) to prevent the forces of terrorism and extremism from building presence in the digital domain. For the specific security threats, including cyber attacks on critical infrastructures, countries should consider entering into arrangements for speedy action and mitigation," Mr Jaishankar said.