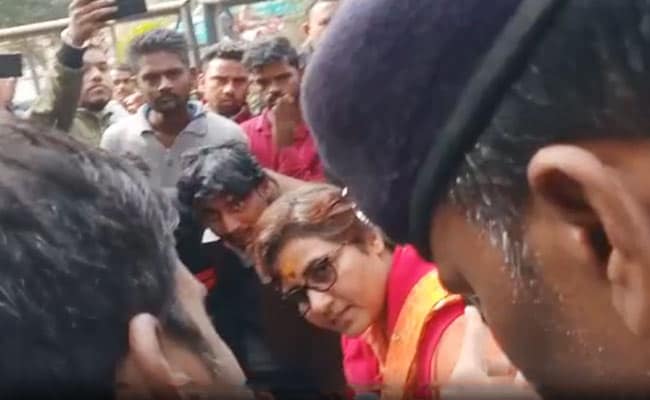 The BJP's Pragya Thakur is the Lok Sabha MP from Bhopal

BJP MP Pragya Thakur, who made headlines on Saturday for a public spat on a commercial flight, waded into yet more controversy after attempts to meet protesting women college students in Bhopal led to tense moments between BJP supporters and students. The Lok Sabha MP from Bhopal was met with "aatankwadi vapas jao (terrorist go back)" slogans when she tried to meet two students - later identified as Shreya Pandey and Manu Sharma - protesting their expulsion over alleged shortage of attendance outside the Journalism and Communication campus of the city's Makhanlal Chaturvedi National University.

Pragya Thakur, who beat the Congress's Digvijaya Singh by more than 3.6 lakh votes in April-May polls, is an accused in the 2008 Malegaon blasts. She is currently out on bail, granted on grounds of ill health, and faces multiple charges under sections of the Unlawful Activities (Prevention) Act, the Indian Penal Code, the Arms Act and the Explosive Substances Act. Six people were killed and over 100 injured in the explosions that took place in Maharashtra.

In a video of the incident Pragya Thakur can be seen leaning over a young girl and gesturing to her repeatedly. The video also shows a police officer attempting to talk to the girl.

All the while a sea of protestors, which reportedly included activists from the National Students Union of India (NSUI), crowd around the BJP MP and the police officer and chants of "aatankwadi vapas jao (terrorist go back)" can be heard in the background.

The situation at the spot started becoming tense after BJP supporters accompanying Pragya Thakur reacted to the slogans. However, order was restored after the police rushed to the spot.

On Saturday Pragya Thakur confronted fellow travellers on a Delhi-Bhopal SpiceJet flight after she was requested to surrender a pre-allotted seat due to rules that forbid wheelchair-bound passengers from occupying the emergency row.

A video of the incident shows people reminding Pragya Thakur that, as a representative of the people, she was duty-bound to not "trouble" them. In response an angry Pragya Thakur is heard saying that she has the "right to a first class seat".