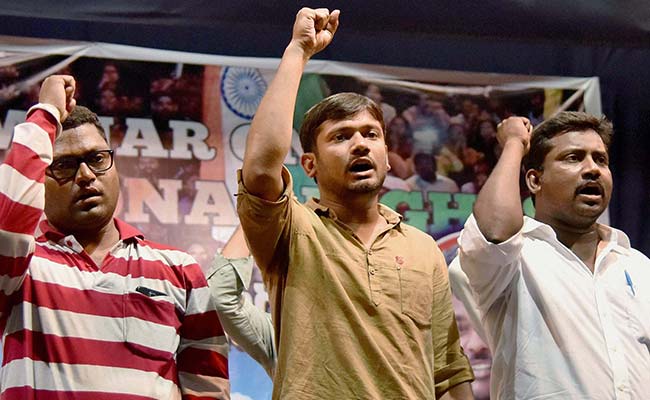 A few days ago, BJP Yuva Morcha leader Omkar Kadam had allegedly threatened the Ranade Institute students that they would be thrashed if they invited Kanhaiya Kumar, who is facing a sedition case. (File photo)

Pune: Days after allegedly receiving a threat from a BJP youth wing leader against inviting Kanhaiya Kumar, the students of Ranade Institute along with two other institutes in Pune came together today to invite the JNUSU leader to hear his side of the JNU issue.

The students of journalism and mass communication college (commonly known as Ranade Institute) of the Savitribai Phule Pune University, FTII and Fergusson College have formed a 'Students Joint Forum' in the wake of recent events.

While FTII was roiled by students' strike to protest appointment of BJP member and actor Gajendra Chauhan as its chairman last year, Fergusson College was in the news when its authorities were accused of allowing an ABVP-organised discussion 'Truth of JNU' which led to a ruckus at the campus last week.

Condemning the "political repression" on campuses, members of the Forum said in a release, "We have sent a formal invitation to All India Students Federation to invite Mr Kumar to have a dialogue with him and to understand his side of 'Truth of JNU'."

The Forum members will meet the Vice Chancellor of SPPU and seek "democratic atmosphere" on the campuses which would allow the students to express their viewpoints and dissent, they said.

A few days ago, BJP Yuva Morcha leader Omkar Kadam had allegedly threatened the Ranade Institute students that they would be thrashed if they invited Mr Kumar, who is facing a sedition case. A police complaint was filed in this regard.

Following these incidents, socialist leader and founder of Yuvak Kranti Dal, Dr Kumar Saptarshi, had said he will indeed invite Mr Kumar to hear his side of JNU controversy.