The student claimed that it was Babul Supriyo instead who had threatened and abused him. 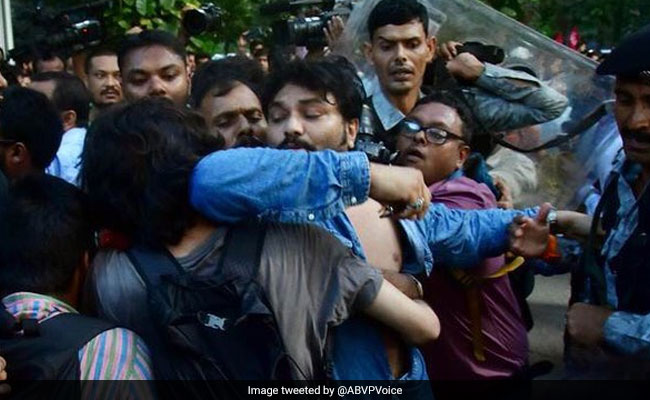 Babul Supriyo was pushed and manhandled at Jadavpur University.

The student who had allegedly pulled Union Minister Babul Supriyo's hair during a protest at Jadavpur University said on Monday that he will not apologise to him.

Debanjan Ballav, the student, told reporters in Kolkata that it was Babul Supriyo who had threatened and abused him when he wanted to speak about lakhs of people “rendered homeless due to the NRC exercise in Assam.”

"As I went forward to ask him a question, Mr Babul Supriyo became aggressive and asked me if I even knew the full form of NRC. He was rude to me. I was pushed by his security guards. I might have touched his hair while trying to straighten himself,” he said.

"It was unintentional. The video showing me pulling his hair has been doctored by BJP's IT cell. The video made it appear as if I had lunged towards him and pulled him by his hair. There is no question of apologizing to him.”

Babul Supriyo had assured the student's mother that no action would be taken against him.

"It is clear in the video that he deliberately pulled Babulda''s (Supriyo) hair and kept threatening him. It is unfortunate that a son is disobeying his mother by refusing to apologise, even though she had sought forgiveness and is concerned about his career,” he told news agency PTI.

Babul Supriyo had on Saturday tweeted to the student's ailing mother, telling her he will not harm her son's career.

“Dear auntie, don't worry. I will not take any action that will harm your son. I wish he learns from his mistake,” he had said.