From Noida To China: How A 93-Year-Old Brought Statue Of Unity To Life

Ram Vanji Sutar had always dreamt of building a colossus that would eclipse the Statue of Liberty. 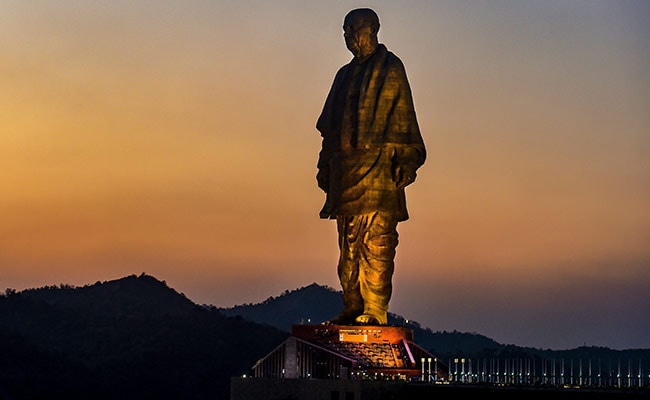 At 182 metres, the Sardar Vallabhbhai Patel Statue of Unity unveiled by Prime Minister Narendra Modi in Gujarat today is twice as tall as the Statue of Liberty in New York.

Ram Vanji Sutar, its creator, had always dreamt of building a colossus that would eclipse the Statue of Liberty.

As a teenager and an aspiring sculptor, Ram Vanji Sutar was overwhelmed by the statue designed by French modeller Frédéric Auguste Bartholdi on Liberty Island in New York Harbour.

More than 800 statues, that dream has come true for the 93-year-old.

What makes designing the Statue of Unity even more satisfying for the renowned sculptor is the fact that this was his most challenging commission.

Before he was tasked with sculpting the Patel statue, his tallest creation had been a 45-foot monument of a mother and her two children at the Gandhi Sagar Dam in Madhya Pradesh.

Mr Sutar knew it was all in the details. "Getting the facial expressions, the pose, the texture and drapery of the statue can be a daunting task when it is 522 feet high," he said.

Work began four years in his 20,000 square feet, designed by in Noida near Delhi with a 3-feet prototype in clay. A few months later, he was ready with the giant thermocol model with the help of 3D imaging.

Next came the little challenge of turning thermocol into bronze.

Mr Sutar's own foundry in Sahibabad in Uttar Pradesh that can handle about 10 tonnes of bronze casting every day. That was hardly enough.

The hunt for a bigger foundry took him to China. That is how a statue designed in a Noida studio was cast in bronze in Nanchang, China.

Age has not dimmed his love for the craft. Mr Sutar says: "sculpture is much more difficult than painting and involves intensive physical work."

He still spends eight hours in his studio. Of all the statues he has designed, Mr Sutar's favourites are those of Mahatma Gandhi. If asked to pick one, he would choose the 16-foot bronze statue in a meditative pose in the Parliament complex, one that has become the backdrop political protests.

"The challenge in designing Gandhiji's statue was bringing out the serenity and the peace on his face," he shares.

Mr Sutar was born in 1925 in a small village in Dhule district in Maharashtra. After scoring a diploma from Mumbai's JJ School of Art in 1952, he worked with the Archaeological Survey of India on a restoration project at the Ellora Caves in Maharashtra.

After the Statue of Unity, Mr Sutar is ready for his next project - a giant Chhatrapati Shivaji Memorial Statue in Mumbai, more than 400 feet high.