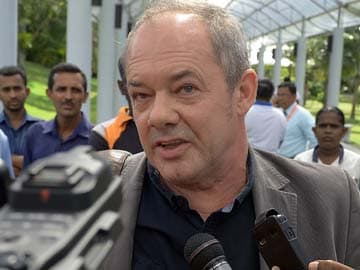 New Delhi: The director of a controversial war film on Sri Lanka streamed it free online in India today, after censors banned its theatrical release over fears it may strain friendly ties with Colombo.

Callum Macrae, the British director of "No Fire Zone: The killing fields of Sri Lanka", said the film will also be available free in Malaysia, Nepal and Sri Lanka - the other countries where its general screening has been banned.

The 93-minute film is a collection of footage recorded in Sri Lanka's northeast by doctors, civilians, rebels and soldiers as the government allegedly bombarded areas teeming with refugees trying to flee the fighting.

The documentary has been contested by the Sri Lankan government as propaganda to discredit Colombo in the eyes of the international community.

In a statement, the producers of the film said the Indian censor board had banned its release on the grounds it "may strain friendly relations with Sri Lanka".

Macrae said India's reluctance to release the film hurt him the most, given the country's deep-rooted tradition of democracy and free speech.

"I find it very disturbing that a country whose independent history is rooted in the struggle for democratic rights and free speech should have taken what is, in effect, an act of overt political censorship," he was quoted as saying in the statement.

In protest against the ban, the documentary was screened today in Chennai by a student's group.

Chennai is the capital of Tamil Nadu where millions of ethnic Tamils share close cultural and religious ties with their counterparts in Sri Lanka.

Officials of the Central Board of Film Certification, the censor board, were not immediately available for comment.

The ban on the film comes after the government last year refused to grant a visa to Macrae to attend the premiere of the documentary which was screened in private in New Delhi and Mumbai.

Rights groups say up to 40,000 civilians were killed by security forces in the final months of a no-holds-barred offensive in 2009 that ended Sri Lanka's decades-long fight against Tamil separatists.

Macrae said he hoped the film's release online will spur a debate ahead of the UN Human Rights Council in Geneva starting March 3.

Promoted
Listen to the latest songs, only on JioSaavn.com
The council will hear calls for the setting up of an international commission of enquiry into alleged crimes committed in the last stages of the war in Sri Lanka.

"As national delegations prepare to meet in Geneva... we hope making the film available in India, Malaysia, Nepal and Sri Lanka will stimulate debate on these vital issues," Macrae said.