Read inOther Languages
This Article is From Aug 28, 2018

Rajyavardhan Rathore is himself an Olympic medalist, and many remarked that it makes all the difference when it comes to showing appreciation for sportspersons 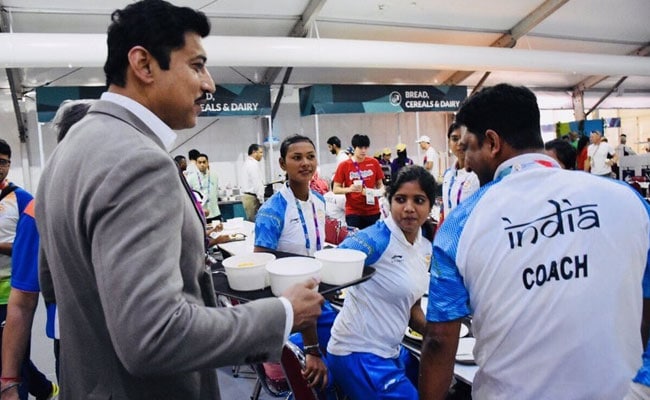 Rajyavardhan Rathore is known for his unusual gestures (Photo: Twitter)

Union Minister Rajyavardhan Rathore has won over social media with an image from the Asian Games in Jakarta.

Mr Rathore, 48, is seen in a formal suit, holding a tray as he speaks to Indian sportspersons at a dining area probably at the Games village in Jakarta. As the image was widely circulated, the minister was praised for "serving players".

The Sports Minister is himself an Olympic medalist, and many remarked that it makes all the difference when it comes to showing appreciation for sportspersons.

Ever seen Indian Sports Minister serving players like this ?

We can see what can happen when a Olympic Medal Winner Player is appointed as a Sport minister of India pic.twitter.com/z41kFXY8XN

Indian sports couldn't have asked for a better sports Minister than Rajyavardhan Rathore. India's success at Asian Games is a shining example of his sterling work behind the scenes in the past 4 years. Salute you Minister!! #AsianGames2018@Ra_THORepic.twitter.com/ElB40LgXZ7

All in game spirit....
Sports minister Rajyavardhan Singh Rathore serving food to the players with a happy heart at the Asian Games 2018.@Ra_THORepic.twitter.com/Ar2X4bJTD7

That's Amazing This is what happens when a Olympic Medal Winner Player is appointed as a Sport minister of India.

Mr Rathore, one of the younger ministers in the central government, is known for his unusual gestures. Earlier this year, his Fit India challenge became viral and drew a response from a number of a number of sportspersons and celebrities. Prime Minister Narendra Modi too, accepted the challenge and posted an exercise video.