No Place For "Bigotry", "Intolerance": Sonia Gandhi On Independence Day

Sonia Gandhi said that the country had surged ahead exponentially in all arenas but at the core were the founding principles of "truth, nonviolence, compassion and unwavering patriotism". 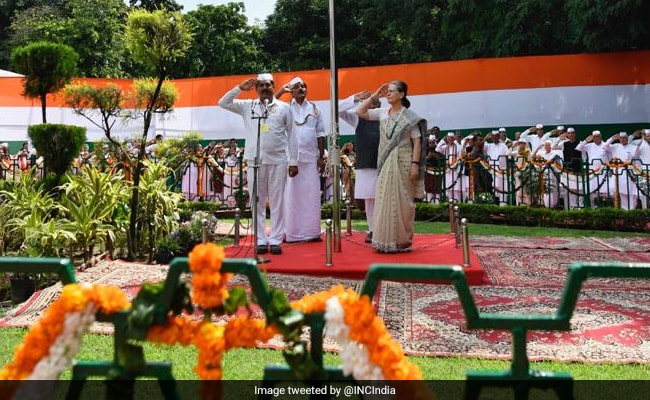 Sonia Gandhi today listed "bigotry" and "intolerance" among the challenges facing the country in her Independence Day message, delivered days after taking over as the Congress's interim chief, saying that a "democratic and resilient" India has no place for such things.

"A democratic and resilient India at 73 has no place for bigotry, superstition, sectarianism, fanaticism, racialism, intolerance or injustice, yet millions of fellow citizens encounter discrimination every day," Mrs Gandhi was quoted by news agency PTI as saying.

Mrs Gandhi today unfurled the national flag at the Congress headquarters. She later said that the country had surged ahead exponentially in all arenas but at the core were the founding principles of "truth, nonviolence, compassion and unwavering patriotism".

"We must rise as a Nation to stand against every act of injustice, intolerance and discrimination to truly cherish our freedom," she said.

The Congress alleges that religious intolerance has been foisted on the country ever since the BJP government came to power at the centre. The term had sparked a national debate.

After coming to power at the centre after the national election in May, Prime Minister Narendra Modi had said that the allegation of intolerance had ended with the polls.

"The Congress' lies are seasonal. When Delhi went to the polls, they began spreading lies about attacks on churches. They began chanting intolerance, intolerance. But the allegations of intolerance ended with the elections," he had said.

Mrs Gandhi was chosen as the party's interim chief by the Congress Working Committee last week, months after her son Rahul Gandhi had resigned as president over its crushing defeat in the May election.