"We will not let our relations with Nepal get jeopardised or snapped even if we have to keep our heads bowed. I think saying this much is enough in this context," Rajnath Singh said without elaborating. 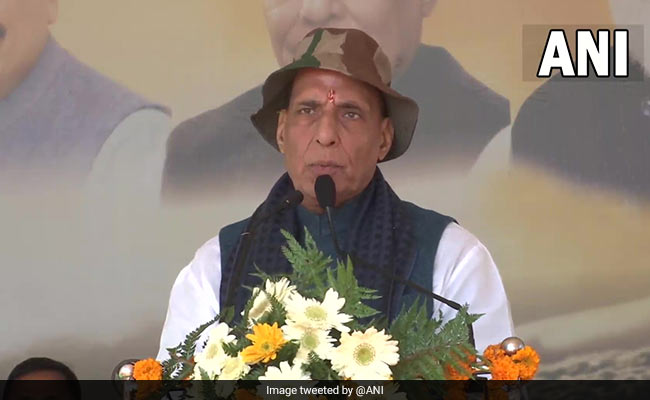 Defence Minister Rajnath Singh on Wednesday said "some forces" want to spoil India's ties with Nepal, but asserted the government would not allow that to happen at any cost.

Addressing the ground breaking ceremony of "Sainya Dham" (martyrs memorial) here, he also said the country's armed forces are free to take their own decisions.

"There are some forces which want to spoil our ties with Nepal but I want to tell you as a representative of the government that we will not let that happen come what may," he said.

"We will not let our relations with Nepal get jeopardised or snapped even if we have to keep our heads bowed. I think saying this much is enough in this context," he said without elaborating.

Mentioning Tibet, he said, India has emotional ties with Tibet too but the situation has changed now. However, he said the route to Mansarovar via Lipulekh pass has been cleared.

He also congratulated the people of the country on the eve of 50th anniversary of India's victory over Pakistan on December 16, 1971 when 93,000 personnel of the Pakistani Army surrendered before Indian forces. He also said, "We never tied the hands of our forces. During the recent tension along the country's borders our soldiers displayed exemplary courage and valour.

"I had given the Army Chief complete freedom to take decisions. I had told him that even if something goes wrong the government will always stand with the armed forces," Singh said in his address after laying the foundation stone of the martyrs' memorial in Dehradun named 'Sainya Dham'.

Accusing Pakistan of always doing some mischief against India, he said, "By conducting surgical and air strikes, we have been able to give a clear message to our western neighbour that we can hit it not just from our side of the border but also on its own turf."

He said under the leadership of Prime Minister Narendra Modi India's prestige has grown internationally and it is heard on international forums with the kind of seriousness that it deserves.